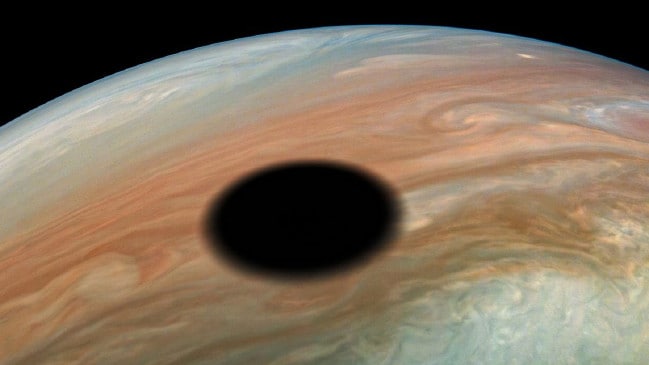 Loki, named for the Norse god of mischief, is about to unleash an eruption on Jupiter’s moon Io, according to astronomers.

Io is the most volcanically active body in our solar system, according to NASA. And Loki is the most powerful volcano on Io.

Loki likes to keep to a schedule, astronomers have noticed. And if their calculations are correct, it should be erupting this month.

“Loki is the largest and most powerful volcano on Io, so bright in the infrared that we can detect it using telescopes on the Earth,” said Julie Rathbun, senior scientist at the Planetary Science Institute. Rathbun presented a poster about predicting Loki’s eruptions this week at the European Planetary Science Congress – Division for Planetary Sciences Joint Meeting 2019 in Geneva.

Observations over the last two decades have shown that Loki brightens during eruptions. During the 1990s, Loki erupted every 540 days, Rathbun observed. Now, it seems to occur every 475 days. Rathbun correctly predicted the previous eruption in May 2018.

Volcanoes are usually hard to predict because a variety of factors can lead to eruptions, Rathbun noted. But Loki is different.

“We think that Loki could be predictable because it is so large,” Rathbun said. “Because of its size, basic physics are likely to dominate when it erupts, so the small complications that affect smaller volcanoes are likely to not affect Loki as much.”

But the pattern could be disrupted again, Rathbun acknowledged, nodding to Loki’s namesake.

“Loki is named after a trickster god, and the volcano has not been known to behave itself,” Rathbun said. “In the early 2000s, once the 540-day pattern was detected, Loki’s behavior changed and did not exhibit periodic behavior again until about 2013.”