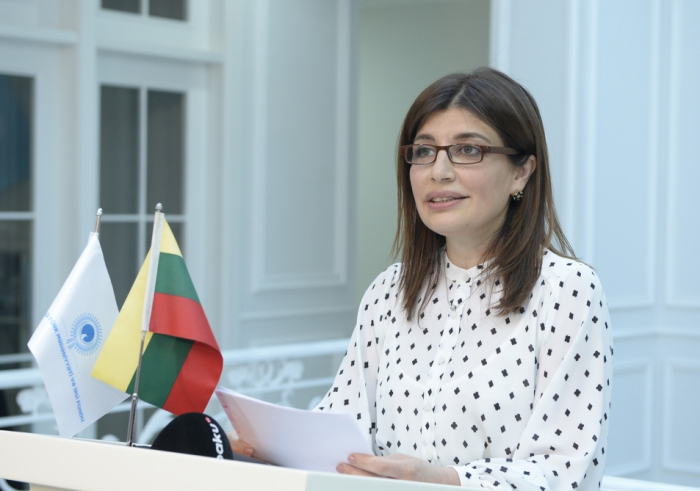 The opening ceremony of the “Lithuanian Tatars” exhibition has been held at the International Turkic Culture and Heritage Foundation with the participation of President of the organization Gunay Afandiyeva and Minister of Foreign Affairs of the Republic of Lithuania Gabrielius Landsbergis.

The exhibition featured rare portraits of prominent personalities, as well as historical photographs reflecting the customs and culture of the Lithuanian Tatars.

Opening the event, the president of the Foundation welcomed the guests and expressed gratitude for their participation in the opening ceremony of the exhibition. Emphasizing that modern Turkic-speaking peoples are widespread beyond their historical borders, Gunay Afandiyeva noted that Tatars living in Lithuania are an integral part of the Turkic World.

Gunay Afandiyeva stressed that the announcement of 2021 as the year of history and culture of the Lithuanian Tatars demonstrates the attitude of the Republic of Lithuania to the Turkic World. “Lithuania’s special attention to the history and culture of ethnic minorities living in the country contributed to the signing in February of this year of a Memorandum of Cooperation between the International Turkic Culture and Heritage Foundation and the Lithuanian Embassy. The main goal of our organization is to preserve, study and promote the cultural values of the Turkic people,” Afandiyeva said.

Speaking at the exhibition, Lithuanian FM Gabrielius Landsbergis said: “At today’s meeting we discussed important events that took place 700 years ago and cultural ties between peoples that originated in the Middle Ages. Lithuania is home to a small but unique group of Tatars and Karaites. The Tatar and Karaite peoples were invited to Lithuania from the Crimea by the Grand Duke of Lithuania in the 15th century. During all this time, despite their small number, they managed to preserve their identity.”

Referring to historical facts, the minister stressed that in 1918 many Tatars took an active part in the creation of the Azerbaijan Democratic Republic and various state structures.

The minister also expressed concern about the current situation of the Crimean Tatars.

Then Gabrielius Landsbergis thanking Gunay Afandiyeva for the cooperation of the International Turkic Culture and Heritage Foundation with Lithuania, as well as for holding an event dedicated to the Lithuanian Tatars, and presented the “Kaunas Mosque” picture to the organization. President of the Foundation Gunay Afandiyeva presented an Azerbaijani carpet belonging to the Karabakh school to FM Landsbergis.

Read more:   Research and Markets: Azerbaijan diesel genset market to grow by over 4% by 2026

A concert program was also organized as part of the event. Tatar folk music on the accordion was performed by Rashid Temirbulatov, Tatar folk songs “Kaz Kanati” by Nailya Ismatulina, “Geljamal” by Zeynab Aliulova, Tatar folk dance by Amal Akhmedulin.