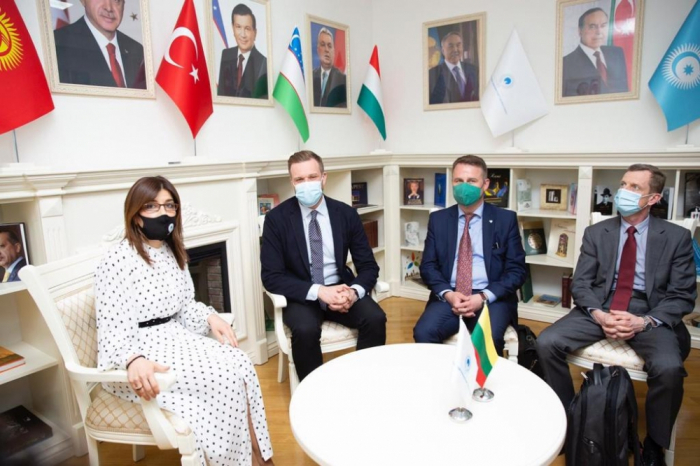 President of International Turkic Culture and Heritage Foundation Gunay Afandiyeva has met with Lithuanian Minister of Foreign Affairs Gabrielius Landsbergis at the Foundation.

Head of the Foundation Gunay Afandiyeva noted that the visit is taking place at a significant time – in the aftermath of Azerbaijan’s historic victory.

Referring to the declaration of 2021 the Year of History and Culture of the Lithuanian Tatars, Gunay Afandiyeva noted that this is a manifestation of Lithuania’s respect for the minorities living on its territory. She stressed that the national minorities of Turkic origin living in Lithuania – Tatars and Karaites – are an integral part of the Turkic world.

Foreign Minister Gabrielius Landsbergis expressed great satisfaction with the visit to the Foundation and highly appreciated the cooperation between the organization and Lithuania. Stressing the importance of his visit to the International Turkic Culture and Heritage Foundation, the Minister said that Lithuania pays special attention to the protection and study of the historical and cultural heritage of the small Turkic peoples living in the country. Speaking about further joint projects to strengthen the partnership between the organization and Lithuania, the Minister invited the Foundation’s President Gunay Afandiyeva to Lithuania.

At the meeting, the parties discussed the development of cooperation between the organization and Lithuania, as well as further plans to expand ties on the basis of the Memorandum of Cooperation signed in February this year between the Foundation and the Embassy of Lithuania in Azerbaijan and Turkmenistan.