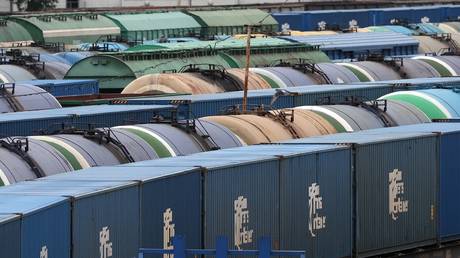 The restrictions on transit to Kaliningrad have affected both railway and road traffic, according to officials Cargo train cars pictured in Kaliningrad, Russia on June 20, 2022. © Sputnik / Mikhail Golenkov

The restrictions imposed on the transit of goods to the Kaliningrad Region by Lithuania have already affected road traffic, officials of the Russian exclave said on Tuesday.

“The partial restriction of freight transit also applies to road vehicles passing through Lithuania. Like [goods transported by] rail, these goods can now only be transported by sea,” the press service of the regional government has said.

Vilnius began implementing the restrictions on Saturday, when Lithuania’s national railway operator banned the flow of sanctioned goods between the region and the rest of Russia, citing guidelines from the European Commission.

Both Vilnius and the EU have insisted that the restrictions, expected to affect roughly 50% of cargo flow between the exclave and the rest of Russia, do not amount to a “blockade” but merely come as an implementation of anti-Russian sanctions imposed by the bloc over the ongoing conflict in Ukraine. (RT)