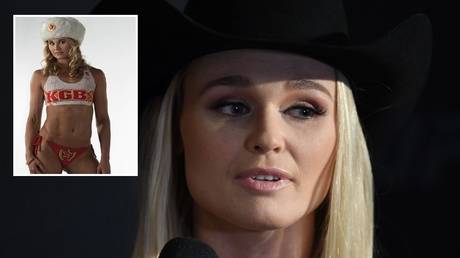 UFC fighter Andrea ‘KGB’ Lee has called to hunt down a judge allegedly caught not paying attention to Jon Jones’ controversial win over Dominick Reyes at UFC 247 after Joe Rogan claimed he “wasn’t even watching the fight”.

Jones defended his UFC light heavyweight title and took Reyes’ 12-fight undefeated record in Houston, Texas on Saturday after a seesaw battle in which Reyes dominated the early exchanges before Jones came on strong.

Many were surprised the fight went the distance, but even more were surprised that despite it being a close battle, the judges gave a unanimous decision 48-47, 48-47, 49-46 in Jones’ favor on the scorecards.

Jones set a new record of 14 UFC title wins, but the seemingly excessive 49-46 scorecard from one of the three octagon-side judges, meaning that the champion had been awarded four of the five rounds, was deemed “disrespectful” by some fans.

UFC head honcho Dana White later described the decision as “insane” in his press conference, admitting that the “scoring was all over the map” and he himself had Reyes winning 3-1 going into the final round.

“My kids are terrorising me that the fix is in, and ‘How come this happened, Dad? Reyes won the fight’. The list goes on and on. There’s not like this landslide of people saying it was a robbery, people have it all over the place,” White said.

Joe Rogan calling out judges for not watching the fight for 30 seconds. This is bad. That’s a problem. I’m sure it happened in the main event too. #UFC247pic.twitter.com/1Qtgk6Jb3U

Joe Rogan exclaimed during his fight commentary: “We’re literally looking at a judge who’s not watching the fight. This is insane.”

Rogan also claimed that the judge was looking down at the ground for around 30 seconds and said that judging is “a giant issue” in mixed martial arts.

Now fellow UFC fighter Andrea ‘KGB’ Lee, who also fought on the card in a losing effort against Lauren Murphy, has called for the judge, who was apparently also playing with his phone, to be hunted down.

“If anyone has video or pictures of the judge who was on his phone during the fights, please send them to me,” Lee wrote on Instagram.

If anyone has video or pictures of the judge who was on his phone during the fights, please send them to me. I just think that if you’re there to judge fights, you should be watching the fight and not on your phone, therefore I think that judge should not have the opportunity to sit cage side and judge fights ever again, especially when there are plenty of other judges who were better qualified and more deserving. #ufc247

“I just think that if you’re there to judge fights, you should be watching the fight and not on your phone, therefore I think that judge should not have the opportunity to sit cage side and judge fights ever again, especially when there are plenty of other judges who were better qualified and more deserving.”

So-called because of her likeness to a ‘Russian spy’, if anyone can catch the mystery judge who gave the allegedly rogue card, then we’re sure it’s the woman named after the most famous security and intelligence unit.

However, White later relented in his incredulity and refused to put any blame on the judges, despite his own scoring of the fight.

“But the reality is, who gives a s***? We’re not judges. None of us are judges,” White said. “Judges call the fight and that’s that. As far as the judging and reffing tonight, I do not think it was perfect. I think we need to do some work down here.”