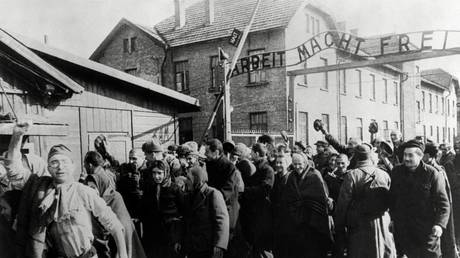 US Vice President Mike Pence’s speech on the Holocaust left the impression it was American soldiers who liberated Auschwitz, erased the Soviet Union’s well-documented act, and even used the solemn occasion to lash out at Iran.

Speaking at the World Holocaust Forum in Israel on Thursday, Pence said that it was “soldiers” who opened the gates of Auschwitz on January 27, 1945. Which soldiers? Pence does not say, whether accidentally or on purpose.

Pence’s omission becomes much more glaring a few moments later, when he honors the memory of “all the Allied forces, including more than 2 million American soldiers, who left hearth and home, suffered appalling casualties, and freed a continent from the grip of tyranny.”

Listening to Pence’s speech, one might be tempted to conclude that it was these American soldiers who liberated Auschwitz, or bore the brunt of the burden of liberating Europe from the Nazis. Yet if we want to talk about truly “appalling casualties,” how about the nearly 27 million soldiers and civilians of the Soviet Union who perished in that war? (RT)