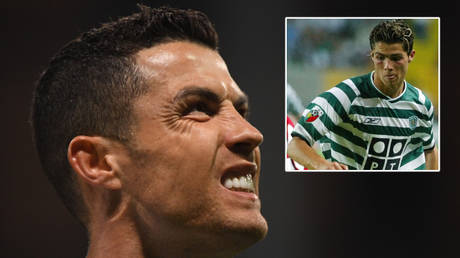 Talk of Cristiano Ronaldo switching to his beloved Sporting Lisbon seems far less fanciful than it once was at the end of a dismal campaign for Juventus. Two league games in eight days now look set to decide his fate next season.

On Tuesday, after earning their first Portuguese title since Ronaldo was on the brink of making his debut for the club before being swiftly snapped up by Manchester United, Sporting Lisbon fans were able to party like it was 2002.

Skipping through the streets and letting off flares, some of them made their way to a road outside the apartment where Ronaldo’s mother, Dolores Aveiro, had watched the game, resplendent in the green and white colors and even, in one photo, carrying a grumpy-looking cat in a team scarf.

If Juventus fail to qualify for the Champions League, Cristiano Ronaldo will ask to leave the club this summer. (Source: @FabrizioRomano) pic.twitter.com/1QVBIDUIUn

Aveiro’s remarks to the fans, telling them that she would bend her son’s ear for a return to the newly-crowned champions who he briefly represented as a teenager, made for a snappy soundbite.

The footage could also have been interpreted the actions of a woman keen to deter stragglers from standing outside her home shouting, but they were enough to earn a response, a couple of days later, from Ronaldo’s agent, Jorge Mendes, who presumably has had to deal with a wearying number of hopeful calls from journalists about Ronaldo’s potential homecoming.

‘Juventus will lose, they’ll miss the Champions League, they will have a financial crisis and Ronaldo will leave’ 😬Christian Vieri isn’t too optimistic about Juve’s chances… pic.twitter.com/NX8OJedFqn

That Ronaldo could well wind up at Sporting is far from revelatory. It is not difficult to imagine him returning to the club where he was first noted for his dribbling almost 20 years ago, spending a swansong sampling the adoration of the public in a league less demanding than the ones in which he has spent almost all of his exceptional career.

The plausibility of the notion that Ronaldo might move there now, though, speaks volumes about his predicament at Juventus. After a season of such remarkable underachievement that it has almost been impressive, Ronaldo faces a looming risk of not playing in the Champions League for the first season in his senior career.

Ronaldo knowing he promised Juventus the Champions League but now taking them to Europa League. pic.twitter.com/HPURAY1Qxb

To put that in perspective, disbelieving stories were widely written when Ronaldo and Lionel Messi failed to make the quarterfinals for the first time since 2005 earlier this year. Ronaldo is not so much a part of the competition’s fabric as utterly intrinsic to its recent history, his genius, tantrums, glories and disasters devoured by his most devout fans and steadfast detractors.

There are an increasingly small number of records that Ronaldo has not established, broken or set his sights upon in the Champions League. Even for such an evergreen athlete, the same sense of dwindling time that drives Ronaldo towards a likely finale in Portugal makes him ever more likely to leave Juventus before the end of his contract in 2022, motivated by more landmarks and memorable nights rather than sitting out a season in the competition that would be almost unthinkable without him.

Ronaldo after scoring 5 goals against the champions of armenia in the europa league next season pic.twitter.com/Rr9Mnba8Sp

At 36, he could have four seasons left in which to do that. Will he want to spend one of them at a Serie A side that looks, to put it charitably, unlikely to provide any consolation by regaining their title next time out?

Had Juve won a 10th title in a row this season, Mendes could have laughed rather than fielded serious calls about Sporting. Even if they had challenged, they would now be Champions League certainties.

If Juventus don’t get a champions league spot, I wonder which team Ronaldo can go to that’s guaranteed CL football 👀 pic.twitter.com/EDRXEPLtjv

As it is, those links to Lisbon have reverberated loudly because of a reasonable assumption that Ronaldo wants to escape another season like the one he has just been part of.

His own place at the top of the Serie A scoring charts has been as reliable as any casual onlooker might expect, but the murmurings that Juventus had catching up to do have become a cacophony of catcalls against rookie boss Andrea Pirlo, whose uncertain leadership has left them a catastrophic 16 points adrift of ecstatic new champions Inter Milan.

🎙Rio Ferdinand :“Ronaldo will stay at Juventus if Juve qualify for the Europa League ? No, I think he goes, I think he says: ‘No, I’m not staying here. I’m a Champions League player.” pic.twitter.com/5pqxqvw0cE

Now they host Inter on Saturday, starting the game a point behind Napoli, who occupy the final Champions League qualification place, and three behind AC Milan in third.

With the title secure, one mercy is that Inter are less predictably foreboding opponents than they would have been a few weeks ago. That could allow Juventus to take advantage and put themselves in a stronger position ahead of the final day of the campaign that will decide whether they spend next season traveling to Real Madrid and Manchester City or Braga and Molde.

Second-placed Atalanta play Milan on that final day, which could do Juventus a favor by allowing them to sneak into the top four with the right permutations being met. Tellingly, though, they will not be able to pip Atalanta, Milan or Napoli on the head-to-head tie-breakers and goal differences that decide Serie A places, barring an eight-goal swing between themselves and Gli Azzurri.

Juventus’ owners, who clearly regard themselves as one of the top 12 clubs in Europe under the terms of the flunked non-meritocracy that was the European Super League, will hope that it does not come down to such agonizing details. So will Ronaldo.

It is unlikely that they will even end up level on points with those above them should they not earn maximum points from the visit of Inter and their closing trip to mid-table Bologna. Pirlo has suggested that lessons will be learned for next season, but major surgery – probably starting with his own position – will be hastened in the absence of a Champions League spot.

As for Sporting and Aveiro, they will know that the likes of Manchester United, Paris St. Germain and Real Madrid are the obvious immediate escape routes for Ronaldo. By the end of next week, those opulent suitors could have a huge new incentive to bargain for Ronaldo with – and Mendes can expect more calls about his star client.