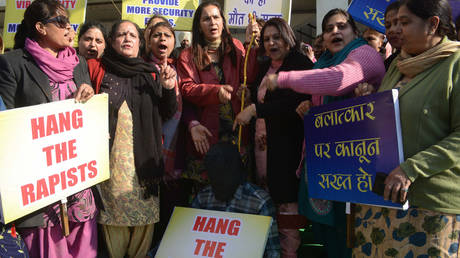 FILE PHOTO: A protester holds a noose as others shout slogans during a demonstration following the gang-rape and murder of a student in New Delhi. ©  AFP / Narinder Nanu

One of five perpetrators of a notorious rape and murder in India has made a bizarre last-ditch effort to dodge death penalty, insisting that India’s poor air quality has already shortened his lifespan enough.

The absurd petition, written in rudimentary English, was recently submitted to the Supreme Court through the inmate’s lawyer.

“Everyone is aware of what is happening in [New Delhi] with regard to water and air. Life is going from short to [shorter], then why the death penalty?” asked the convict, Akshay Singh, adding that air in the city is “like a gas chamber” and “full of poison.”

And terrible grammar. This Petition should be rejected just for the abhorrent usage of English.

The inmate also cited Hindu religious texts, arguing that “people lived for thousands of years” previously – he did not specify when – and that average lifespans had steadily fallen. “When age is reducing, why [the] death penalty?” the convict reasoned.

The appeal is unlikely to be accepted by the court, having rejected all of Singh’s previous attempts to overturn his execution, granting only temporary delays to date. (RT)