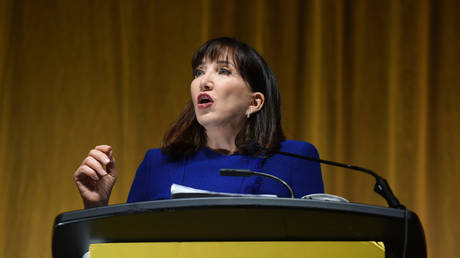 She may have no chance of getting her hands on the keys to the White House next month, but a growing number of Americans are coming around to her limited government, anti-interventionist, decentralized vision for the US.

Jo Jorgensen feels Donald Trump and Joe Biden are scared to debate her. The Libertarian candidate points to her party’s burgeoning popularity and direct policies as two of the reasons for the two big hitters’ reluctance to let her on the podium.

Speaking to RT on the way to a campaign event in Milwaukee, she said: “They are the ones in power and they will do anything they can to keep from giving it up. They don’t want me on the debate stage and they’re not putting me in the media, as they know that I’ll be the only real choice. Both of those candidates and parties want to spend our money and make our decisions for us, neither one has an answer to our healthcare problem.”

Also on rt.com MSM BEAT THE BIDENS to declare laptop leak ‘Russian disinformation’ – when did the media shilling get this obvious?

Echoing another third-party candidate Don Blankenship, Dr. Jo is frustrated by how the system has prevented her from being part of the televised debate, alongside her Republican and Democratic rivals. She also claims the mainstream media are apprehensive to feature the other candidates – maybe why Dr. Jo doesn’t once mention Trump or Biden by name during our interview.

Read more:   This statement allows us opportunity to return our other occupied regions without bloodshed - Ilham Aliyev

“Our 2016 candidate was included in the polls to get on the debate stage and if he had gotten 15 percent, he could have been there. At one point, he got as high as 13.6 percent, so this time around they didn’t even include my name. They thought ‘uh oh, they are getting kinda close, so we’ve got to really lock them out’. This time as I wasn’t in the polls, there was no way for me to be on the debate stage,” she said.

Despite the blockade, a grassroots effort and legal challenges means the Libertarian Party is on the ballot in all 50 states plus DC. And by their own estimates, they could potentially touch 12 percent of the American population. They even may have an appeal to more progressive elements by offering up Jo, a woman, while the main two parties again run two elderly, white men.

Dr. Jo, 63, revealed: “Polls put Libertarian people at about 40 million, they think they should be able to make their own choices and decide how to spend their own money – not the special interest groups, politicians or bureaucrats in Washington. But they don’t know about our party, or they are only shown the other two parties, or think ‘if I vote for you, you’re not going to get elected’ but if all the people got together, then I would get elected.”

Dr. Jo is softly spoken, the daughter of Danish immigrants to the US she made her name working for IBM before joining Clemson University in South Carolina where she has lectured in psychology since 2006. But despite her quiet, academic demeanor, she and her party have some radical plans. Their main priority is to end American involvement in foreign affairs and that includes curtailing all aid. She explained: “Americans are very generous and if they want to send money to other people around the world, they are free to do that. But there’s no reason why the government should pick who gets our money and who doesn’t.”

Her first act in office would be to sign an order to bring home the military. “That is something I could do as commander-in-chief,” she continued, “I want to turn America into one giant Switzerland, armed and neutral. We absolutely have to protect our shores and border but there’s no reason for us to be in 150 countries around the globe. We spend more on the military than the next seven countries combined, that’s insane. If we just defended our own country, we wouldn’t be spending all that money. The money is bad enough but being everywhere in the world is making us less safe, not more safe – and the job of the military is to make us safer.”

Also on rt.com Kamala Harris bursts out laughing when asked if she’ll push for ‘progressive’ policies, igniting rage of the left (VIDEO)

A commonly held view of the American population is that they lack awareness, or are disinterested in matters outside their borders, something Dr. Jo agrees with saying: “A lot of Americans don’t realise we’re being seen as bullies. We wouldn’t like it if Iraq or Iran came to our country and started taking over cities, we wouldn’t like it at all. We only see if from our standpoint and we really need to start being good neighbours.”

As the name of the party suggests, a theme of Dr. Jo’s policies is to chop down the size of the government and then hand executive power to local communities.

“We need less government across the board, but especially at the federal level. For instance, we have a Department of Education that is a ‘one size fits all’ for the entire country. We didn’t have it before the 1970s, it was up to the locality and each city or town to decide how to run their own schools. Education should be decided on by parents, teachers and students,” she said.

“It’s the same with policing. We shouldn’t be telling police departments how to do their job and we shouldn’t be giving them leftover military tanks either, it just makes the problem worse.

The average person shouldn’t have much interaction with the federal government at all. America is a large country, we’ve got rural areas, we’ve got huge cities, we’ve got a lot of places in between – it should be up to each area to decide what serves them best.”