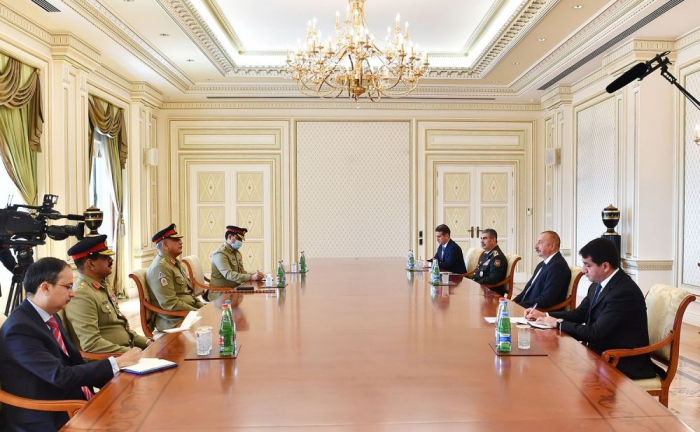 Chief of Army Staff of the Islamic Republic of Pakistan, General Qamar Javed Bajwa held a meeting with President Ilham Aliyev and congratulated the head of state on the historic victory in the Second Karabakh War.

Recalling Azerbaijan’s victory in the war with Armenia and the return of its territories a great event for every Muslim and every Pakistani, Qamar Javed Bajwa stated: “Despite the bias against Azerbaijan, you have restored your territorial integrity. I sincerely congratulate you. Also, I would like to note that one of my friends visited Azerbaijan in 1993 and was very disappointed at that time. Last year, when he again visited Azerbaijan, he was impressed by the development in Azerbaijan, which was achieved under the leadership of your father, who was a prominent figure, and your leadership”.

The Pakistani general noted that one of the common partners of Azerbaijan and Pakistan is Turkey: “As you say, ‘one nation, two states’, Turkey is very close to our hearts. We have built close relations with Turkey, too. The ties among the three countries create enormous opportunities for our cooperation. We have many opportunities to consider in Azerbaijan, our businessmen can visit here. ”