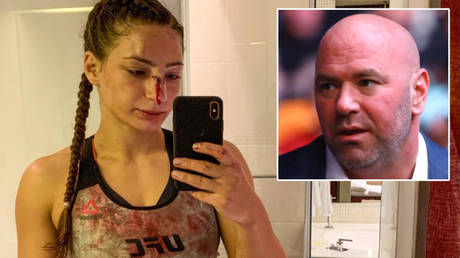 Liana Jojua has spoken about the gory injury she suffered in her first-round loss to Miranda Maverick at UFC 254, and revealed how UFC president Dana White consoled her after her fight was controversially stopped.

Flyweight newcomer Jojua was thwarted by a horrific-looking cut to her nose from an elbow as she was beaten by Maverick on “Fight Island.”

Blood gushed down her face and chest as she attempted to return for the second round of her third fight with the promotion.

Jojua’s scrap came to a premature conclusion as her injuries, which she has revealed needed stitches, saw the contest called off.

“I was ready and willing to keep fighting but the doctors didn’t let me,” Jojua told RT Sport, admitting to “sorrow, sadness and heaviness in the heart” over the nature of the stoppage.

“To be honest, I didn’t know that I had such a huge cut. Even if I knew, I’d still fight but I could feel that there was a lot of blood.

“I even spat some blood out but I was ready to fight to the end. I’ve broken my nose in fights before.

“I was even kicked in the nose once and I fought the fourth and fifth rounds with a broken nose.

“The cut was deep but I don’t think it hindered me. I could see everything, I was breathing.

“I think they should have given me a chance and then stopped the fight if things got worse, but I didn’t get the opportunity.

“I’ve seen people fight with cuts like that. My cut didn’t prevent me from seeing.

“What could I have done? My mouth was full of blood. I noticed my nose bleeding twice.

“The first time, I didn’t really pay attention to it. Then the cut opened and blood was gushing.”

Jojua was understandably emotional as she received treatment on the gruesome cut after the fight, although she was unaware that UFC president White was in the room to hear her shedding a tear or two on “Fight Island”.

White approached Jojua to offer commiserations after her early preliminary card bout at the event that saw Khabib Nurmagomedov defeat Justin Gaethje, then retire from the sport.

“When I was taken to the doctor, (White) came to observe what was going on,” she recalled.

“I was staying strong and not showing any tears, like a real man. When I thought that there was nobody but doctors in the room, I started crying.

“Then I hear his voice saying: ‘Don’t cry.’ He starts to calm me down and I thought, ‘Oh no – he can see me,’ and started crying even more.

“It was a little awkward. I didn’t want to show any weakness even though I just lost, but what can you do?

“He didn’t forget about me and showed support. He said that it wasn’t the best stoppage and that he’ll give me another fight.

“I was happy that he paid attention to me and that he’ll give me another fight.”

Impressively tough Jojua was distraught with the conclusion, having begun to plan the second round during an opening five minutes that she was pleased with.

Her worst previous injury was a broken arm. “They used a needle and thread,” she explained of the stitching to her nose. “They gave me an anesthetic but I could feel everything.

“It was very unpleasant. I could feel the thread going through my skin. It’s a bad feeling. I got five or six stitches. It was horrible. This the first cut that I got stitched up.

“The doctor offered to do plastic surgery but I don’t care. People will say I have a big Georgian nose but, honestly, I don’t care about appearances.

Also on rt.com ‘NO, NO, NO!’ Liana Jojua DISTRAUGHT after HUGE cut on her nose causes TKO defeat at UFC 254 (VIDEO)

“I’m happy with my God-given looks and I don’t want to change anything. Once the swelling goes down, everything will go back to normal.”

Jojua has been encouraged by the support of her growing fanbase. “Even though my arm wasn’t raised, my fans wrote a lot of positive messages calling me a warrior and saying that I had the guts to come out and keep fighting,” she said.

“Unfortunately they didn’t let me do that this time but people saw my spirit and I got a lot of support.

“My fans and I are broken-hearted but I’m happy they’re with me whether I win or lose. That’s very important because when you win everyone congratulates you but when you lose, people start to forget and slander you.

“I got some hate but I also received a lot of support and that gives me motivation to keep training. Even though I didn’t win, I don’t feel like I lost.

Also on rt.com ‘Many are inappropriate’: UFC starlet Liana Jojua says she receives CRAZY messages from fans as she prepares for battle at UFC 254

“It just wasn’t my night. I did everything well but I can’t prevent a doctor from stopping the fight.

“We can’t prevent everything. It’s a brutal sport and one punch can decide everything, which is what happened.”

Teaching assistant Maverick also said she had not seen the stoppage coming and had wanted more time to impress White.

“I wouldn’t be happy with the victory if I were her,” said Jojua. “Why be happy when you lost the round and your opponent was disqualified?

“We’ll see her future fights. I hope to fight her again. I won’t ask for anything – I’ll fight whoever they give me.”