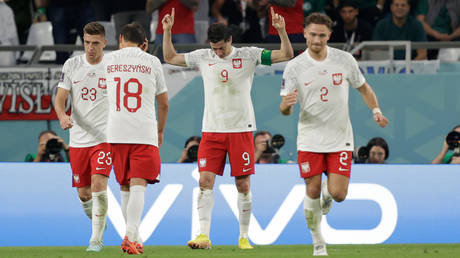 Robert Lewandowski was on the scoresheet for the first time in a World Cup match as the forward helped Poland to a 2-0 win against Saudi Arabia in Qatar on Saturday.

Lewandowski struck in the 82nd minute of the match at Education City Stadium, capitalizing on a defensive lapse to slot the ball past Saudi goalkeeper Mohammed Al Owais.

One of the most prolific forwards of his generation, the 34-year-old Lewandowski had not previously made his mark in four appearances at the World Cup finals – including three games at the Russia 2018 tournament.

The goal was his 77th in 136 appearances in Polish national team colors, matching the mark set by Pele for Brazil and moving Lewandowski into joint 10th place on the all-time men’s international list. (RT)