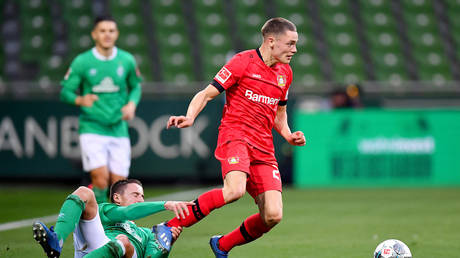 Bayer Leverkusen midfielder Florian Wirtz became the youngest scorer in Bundesliga history when the 17-year-old struck a late consolation for his team against table-topping Bayern Munich on Saturday.

Second half substitute Wirtz netted the final goal of the game as Leverkusen fell 4-2 to visitors Bayern, cutting inside from the right to curl past Manuel Neuer from 15 yards out in the 89th minute.

At 17 years and 34 days old, Wirtz became the youngest ever scorer in German top-flight history, breaking the previous record set by Nuri Sahin, who was 17 years and two months old when he scored for Borussia Dortmund back in 2005.

17/34 – With 17 years and 34 days @bayer04_en‘s Florian Wirtz is the youngest goalscorer in #Bundesliga history. Teen. #B04FCBpic.twitter.com/xuHcSEpFmk

The goal was the most noteworthy aspect of the afternoon for Bayer, who relinquished an early lead from Lucas Alario’s goal as league leaders Bayern responded through Kingsley Coman, Leon Goretzka, Serge Gnabry and Polish goal machine Robert Lewandowski to propel themselves to a ninth straight league win.

Before the match began at BayArena, Bayern players warmed up in T-shirts emblazoned with the message “Rot Gegen Rassismus” – which translates as “Red Against Racism” – as well as the slogan “Black Lives Matter.”

The players also wore armbands carrying the same message during the game, in a mark of respect to the protests sparked by the death of African American man George Floyd at the hands of police in Minneapolis.

An important victory with an even more important message: #blacklivesmatter 💪💪🏿 @fcbayernpic.twitter.com/o4DFwNXOsY

German football bosses have confirmed that players will not be sanctioned for on-pitch messages of support for the BLM movement or calls for justice for Floyd.

Bayern’s win lifted them 10 points clear temporarily at the top of the Bundesliga table before second-place Borussia Dortmund took on Hertha Berlin later on Saturday. (RT)