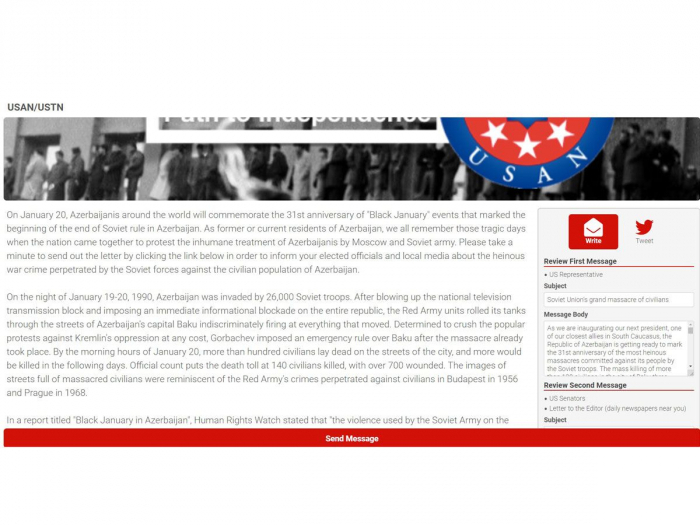 The US Azeris Network (USAN) in the United States has launched a letter campaign dedicated to the 31st anniversary of the January 20 tragedy.

“On January 20, Azerbaijanis around the world will commemorate the 31st anniversary of “Black January” events that marked the beginning of the end of Soviet rule in Azerbaijan. As former or current residents of Azerbaijan, we all remember those tragic days when the nation came together to protest the inhumane treatment of Azerbaijanis by Moscow and Soviet army. Please take a minute to send out the letter by clicking the link below in order to inform your elected officials and local media about the heinous war crime perpetrated by the Soviet forces against the civilian population of Azerbaijan.

On the night of January 19-20, 1990, Azerbaijan was invaded by 26,000 Soviet troops. After blowing up the national television transmission block and imposing an immediate informational blockade on the entire republic, the Red Army units rolled its tanks through the streets of Azerbaijan’s capital Baku indiscriminately firing at everything that moved. Determined to crush the popular protests against Kremlin’s oppression at any cost, Gorbachev imposed an emergency rule over Baku after the massacre already took place. By the morning hours of January 20, more than hundred civilians lay dead on the streets of the city, and more would be killed in the following days. Official count puts the death toll at 140 civilians killed, with over 700 wounded. The images of streets full of massacred civilians were reminiscent of the Red Army’s crimes perpetrated against civilians in Budapest in 1956 and Prague in 1968.

In a report titled “Black January in Azerbaijan”, Human Rights Watch stated that “the violence used by the Soviet Army on the night of January 19-20 was so out of proportion to the resistance offered by Azerbaijanis as to constitute an exercise in collective punishment. The punishment inflicted on Baku by Soviet soldiers may have been intended as a warning to nationalists, not only in Azerbaijan, but in the other Republics of the Soviet Union,” reads the letter.

You can read the original letter HERE .

“We are keen to expand our cooperation with Turkey” – Anar Karimov

“Our visit to Turkey has been fruitful. As we met in Ankara we exchanged views…

With a high degree of probability, Georgia will acquire an Indian coronavirus vaccine in the…

‘Over $50B material damage inflicted on Azerbaijan by Armenia’

13:39 ‘Stay the course’ WHO urges amid rise in virus cases