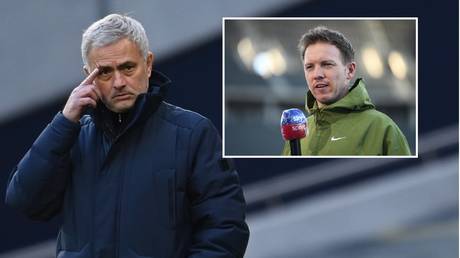 Nagelsmann has been linked with Spurs should they ditch Mourinho. © Reuters

Highly-rated young boss Julian Nagelsmann could be the latest high-profile German coach to move to the Premier League, with the 33-year-old reportedly ‘interested’ in replacing Jose Mourinho at Tottenham Hotspur.

After a promising start to the season, Mourinho’s side have fallen from grace as we enter the Premier League season endgame amid a dip in form which saw the North Londoners – who were at one point at the summit of the table – descend into ninth position after losing five of their last six league games.

Also on rt.com Not-so-special one: Jose Mourinho surges to the front of the Premier League sack race amid Tottenham’s terrible mid-season slump

The misfiring performances have led to increased speculation that Tottenham chairman Daniel Levy may opt to cut his losses with the nomadic Mourinho and instead join what seems to be a growing trend of imports from the German Bundesliga.

And while Mourinho remains on solid footing at the Tottenham Hotspur Stadium, Nagelsmann would reportedly be interested in potentially taking over at the club, should the opportunity arise.

Respected Bild reporter Christian Falk tweeted “true” as he shared the claims that the 33-year-old could be tempted to Spurs.

Nagelsmann himself said earlier this month that he would be interested in taking on a challenge in the English top flight.

“It could be a step in the future. You know, in football it’s not that easy to plan ‘how long will you be a manager in Leipzig? When will you go to the Premier League?’

“Then perhaps in the future we can meet face-to-face in the Premier League, who knows.”

Nagelsmann is held by many as the most exciting young coach in Europe after losing just 13 games with RB Leipzig since taking the helm in the summer of 2019. They currently stand just three points behind Bayern Munich at the top of the Bundesliga, while also boasting a game in hand.

His achievements this season have been trumpeted further after losing star forward Timo Werner to Chelsea in the summer, while they are also set to lose French international defender Dayot Upamencano to rivals Bayern at the end of the current campaign.

Nagelsmann’s candidacy for top jobs in English football will likely be strengthened by the success of former Borussia Dortmund boss Klopp at Liverpool while another German, Thomas Tuchel, remains undefeated at Stamford Bridge since taking over the Chelsea job from Frank Lampard in January.

However, RB Leipzig sporting director Markus Krosche appears keen to hang on to their prized asset – particularly after overseeing high profile exits on the playing staff.

“When you do a good job, you arouse desire,” Krosche told Bild of Nagelsmann’s suitors.

“But Julian feels comfortable because he has everything he needs here. The team is developing great. That’s why I see no reason for him to switch, especially since he has a valid contract with us.” (RT)