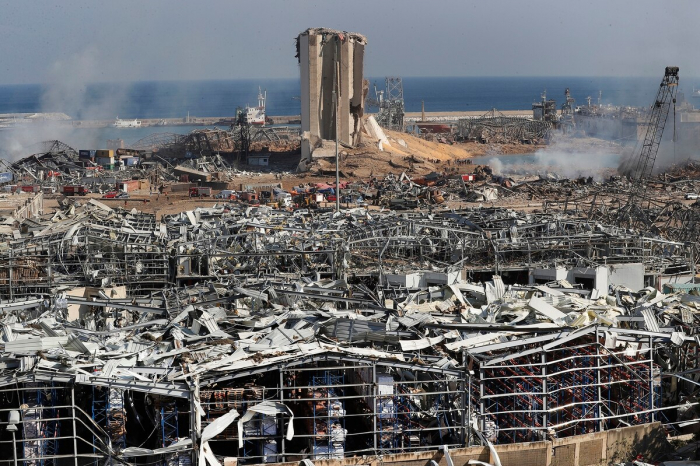 Lebanon’s president said on Friday its investigation into the biggest blast in Beirut’s history would examine whether it was caused by a bomb or other external interference, as residents sought to rebuild shattered homes and lives.

Rescuers sifted rubble in a race to find anyone still alive after Tuesday’s port explosion that killed 154 people, injured 5,000, destroyed a swathe of the Mediterranean city and sent seismic shockwaves around the region.

“The cause has not been determined yet. There is a possibility of external interference through a rocket or bomb or other act,” President Michel Aoun told local media.

Aoun, who had previously said explosive material was stored unsafely for years at the port, said the investigation would also weigh if the blast was due to negligence or an accident. Twenty people had been detained so far, he added.

While the United States has said it did not rule out an attack, Israel, which has fought several wars with Lebanon, has denied any role. Turkish President Tayyip Erdogan said the cause was unclear, but compared the blast to a 2005 bombing that killed former Prime Minister Rafik al-Hariri.

Sayyed Hassan Nasrallah, leader of Lebanon’s powerful Shi’ite group Hezbollah, denied what he said were “preconceived” comments both domestically and abroad that the Iran-backed group had arms stored at the port.

He called for a fair investigation and strict accountability for anyone responsible without any political cover.

“Even if a plane struck, or if it was an intentional act, if it turns out this nitrate had been at the port for years in this way, it means part of the case is absolutely negligence and corruption,” he said.

The customs director and a predecessor were arrested later on Friday.

“Who is the criminal, who is the killer behind the Beirut explosion?” he said. “Only God can protect, not the corrupt … The army only protects the leaders.”

Security forces fired tear gas at a crowd in Beirut on Thursday, as anger boiled over at the ruling elite, who have presided over an economic collapse. The small crowd, some hurling stones, marked a return to the kind of protests that had become a feature of life as Lebanese watched their savings evaporate and currency disintegrate, while government decision-making floundered.

According to the UN Security Council resolutions, Armenia should have withdrawn from the occupied territories…

Footage of arms shipment from Iran to Armenia released – VIDEO

Yesterday, video materials reflecting the transportation of weapons from Iran to Armenia were spread on…

Armenians fired at another civilian facility in Tartar

Armenian armed forces continue to shell the city of Tartar. Residents of the region told…

Armenian armed forces have been shelling Tartar city since 08.00 this morning, Report’s correspondent on…

The UN Security Council (UNSC) called on Armenia and Azerbaijan to immediately cease hostilities, according…

“The UN Security Council has adopted four resolutions on the settlement of the Nagorno-Karabakh conflict.…

7 civilians wounded as a result of Armenian shelling in Terter