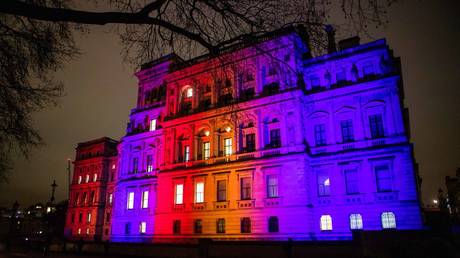 A swath of what appear to be secret Foreign & Commonwealth Office documents outline a multimillion-pound British effort to train rebel fighters in Syria via private companies, knowing but brushing off the risk of jihadist hijack.

The documents released by the hacktivist collective Anonymous appear to expose a variety of covert actions undertaken by the UK government against the Syrian state over many years.

The overriding objective behind them all, the papers suggest, was to destabilise the government of Bashar Assad, convince Syrians, Western citizens, foreign governments, and international bodies that the Free Syrian Army (FSA) was a legitimate alternative, and flood media the world over with pro-opposition propaganda.

The dimensions of the assorted information warfare operations implied in the papers, some of which have been detailed by Grayzone Project, were vast. In a representative example, “social enterprise” firm ARK, founded by veteran Foreign & Commonwealth Office (FCO) operative Alistair Harris, “rebranded” the Syrian Military Council, “softening the Free Syrian Army’s image” in order to “distinguish it from extremist armed opposition groups and establish the image of a functioning, inclusive, disciplined and professional military body.”

At least one cog in this cloak and dagger connivance was overtly militant in nature. From August 2016, a consortium of private contractors ran a programme for the FCO, through which “training, equipment, and other forms of support” was provided to the FSA’s ‘Southern Front’ coalition, to “foster a negotiated political transition, support moderate structures and groups in opposition held areas of Syria, counter violent extremism and prevent the establishment of a terrorist safe-haven.”

Under its clandestine auspices, up to 600 belligerents were trained every year the operation ran, an indeterminate total – the endeavour was dubbed MAO B-FOR (Moderate Armed Opposition Border Force Capability Project), and forecast to cost the FCO £15,767,599. 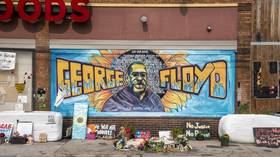 B-FOR’s ‘statement of requirements’ document sets out in succinct detail Whitehall’s objectives in pursuing the project.

“The aim… is to generate pressure on the Assad regime and on extremists, in the south the country… If MAO border groups are better able to secure and maintain control of specific areas of responsibility across liberated near-border communities along Syria’s southern border with Jordan… the MAO will demonstrate its tangible value to the local and international community as an effective security actor… This will reinforce perceptions that there is a credible and effective moderate opposition able to provide support for an alternative pathway to political transition,” the project tender states.

In practical terms, fighters in “international borders under MAO control” and “areas bordering MAO control under the control of another entity or under no control” – the Jordan-Syria border being the FCO’s “current priority area” – were intended to be “better able to control their AOR [areas of responsibility] through effective use of relevant tactics, operations, equipment, infrastructure, and ability to react to a changing tactical situation.”

To this end, the UK government provided a “dedicated training site” in Jordan “at no cost” to project contractors. The site is situated 45 minutes from the Jordanian capital, Amman, according to an annotated Google Earth snapshot found among the leaked papers. The 600-acre expanse comprised “accommodation, ablution, dining, classrooms, driving track, outside rural environment areas, and open space for equipment storage solutions.” In particular, trainees were to be tutored in the effective use of AK-47s, PK machine guns, and pistols, with 175 fighters able to be accommodated on-site at a time, four weeks the maximum period they could be tutored there continuously.

Contractors were also asked to ensure the project took into account, among other things, Whitehall’s “policy toward gender” – a reflection, just like the tender’s references to “reinforcing perceptions,” of B-FOR’s strong psychological component.

Also on rt.com How rock star Roger Waters was hung out to dry by Amnesty and Bellingcat for his views on Syrian ‘chemical attack’

We have reached out to the companies for comment.

In terms of project roles, ASI – which according to the proposal had been operating in Syria since early 2013, and boasted “well over” 100 field staff in the country – was to provide “strategic stakeholder engagement, project management, project leadership positions, conflict research and analysis and monitoring and evaluation functions.” Pilgrims Group – said to have “supported a large number of media organisations operating in Ukraine” – was tasked with “training delivery, initial military skills assessment, training programme design.”

KBR – which has reaped untold millions from a variety of US conflicts, been embroiled in numerous high-profile scandals, and was reportedly nicknamed “Kill, Burn & Loot” by US marines during the Iraq War – had responsibility for “manning procurement and logistics functions,” including providing the facility’s “quartermaster, storemen and a liaison officer at the key port of entry for imported goods.” Oakas was to offer “bespoke training for MAO command elements (‘battle staffs’) on decision making and planning,” and GlenGulf the “provision of training to officers and commanders on human intelligence gathering and management.”

Accompanying project staff CVs reveal many individuals involved in B-FOR were senior UK military veterans, who all received sizeable three-figure per diem fees for their participation. For instance, its ranks included a former senior British military advisor to US Central Command, experience ASI claims granted him “in-depth knowledge” of the Syrian “context.” 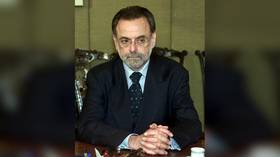 Part of that context at the time would’ve been the virtual collapse of Southern Front as a serious fighting force. Formed in February 2014 at the behest of the US Military Operations Command (MOC) in Jordan, the Front was a coalition of 50-60 rebel groups. As ASI’s proposal notes, its constituent factions were “given various types of support from the MOC,” including “small arms, artillery, anti-tank guided missiles, ammunition, vehicles, communications equipment, and uniforms,” the Command also paying fighters’ salaries.

Washington’s largesse was fundamental in the Front scoring a series of victories over government forces throughout 2014 and the first half of the next year. In the process, it became the largest rebel umbrella organization in southern Syria, comprising 25-30,000 fighters, and challenging the political and military dominance of Salafist Al-Nusra, the region’s then-largest jihadist group. The mainstream media widely promoted the Front as Western leaders’ best hope of achieving a “moderate” Syrian “revolution” – despite many of its units frequently cooperating and collaborating with Al-Nusra.

However, an over-ambitious attempt by the Front to wrest the city of Deraa’s northern and eastern districts from government control in June 2015 ended in embarrassing failure. The cataclysm led to almost total cessation of MOC support, which in turn meant the Front lost much of its operational capabilities and many of its fighters, who defected in droves to other rebel groups offering salaries. Saudi Arabia subsequently stepped in to provide weapons and fresh funding to the ailing force – B-FOR represented London’s illicit contribution to keeping it functional, and ASI’s proposal makes clear the consortium well-understood the many risks attached to the project.

Also on rt.com Galloway: Lying industry may be the only sector of Western economies still in full production & TAXPAYERS pay for it

A lengthy section of ASI’s proposal – ‘oversight and management of threats and risks’ – details some of these myriad hazards, along with their likelihood and impact. It was considered highly probable, for instance, groups such as Al-Nusra and ISIS would interfere in the program, “due to perceptions of an ‘international political agenda’” – as a result, extremists “may seek to prevent trainees from joining or inhibit them from fulfilling their functions once trained via kidnap, assault and theft of equipment.”

The possibility that the consortium’s curated fighters may choose or be forced to join other, non-border force Southern Front operations, in turn “[leading] to a weakening of the border capability and perception of UK support to active military operations,” was rated as “medium.” Border force trainees collaborating with extremist actors and/or committing human rights abuses, in the process compromising “the legal and reputational viability of the programme,” was likewise considered of “medium” likelihood and impact.

ASI’s proposed method of dealing with these and other dangers was almost invariably to simply “transfer” responsibility for “owning and managing” the problem to the FCO itself, even suggesting the UK government must simply “tolerate” failings such as the loss of equipment “to a reasonable degree.”

It seems the FCO either acquiesced to shouldering the inherent burdens, or was intensely relaxed about such issues, for the consortium was duly awarded the B-FOR contract, judging by other papers found in the leak.

Non-Disclosure Agreements signed June 10, 2016 by the firms involved indicate they were obliged to adhere to the stringent confidentiality requirements of the 1911 and 1989 Official Secrets Acts, forbidding them from “disseminating any information related to the project to any third party.” Meticulous instructions for disposing of ‘secret’, ‘restricted’, and ‘confidential’ FCO communications were also included. (RT)