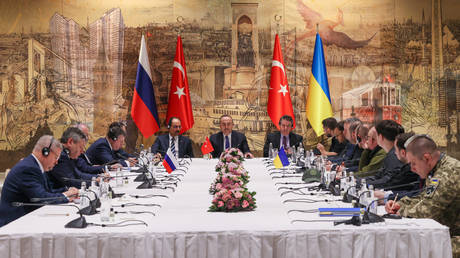 Moscow is not asking for negotiations to win time, regardless of such claims, the foreign minister says FILE PHOTO. Türkiye-mediated Russia-Ukraine peace talks in Istanbul on March 29, 2022. © Cem Ozdel / Anadolu Agency via Getty Images

Allegations that Russia is seeking peace talks with Ukraine as a ploy for a military build-up are false, Russia’s foreign minister has said. Sergey Lavrov was responding to statements to that effect from top officials in Kiev, including President Vladimir Zelensky.

The accusations are “ridiculous and unpleasant, because [those who make them] blatantly lie,” the minister told journalists on Thursday during a press conference.

“We never asked for any negotiations. But we always stated that if somebody has an interest in a negotiated settlement, we are ready to listen,” he stressed.

In October, President Zelensky said during a virtual speech to the European Council that Russia was “manipulating the negotiations issue” due to Kiev’s battlefield successes. He went on to claim that Moscow was calling for dialogue, “which it rejected itself by starting a war against Ukraine and all of you, the entire Europe,” while rejecting “dozens of our proposals” for peace. 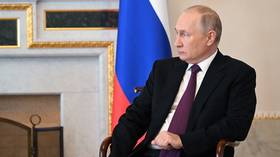 Read more:   President Ilham Aliyev: If the Armenians do not give up their ugly plans, they will face very serious consequences

Lavrov noted that Ukraine and Russia were on the verge of striking a peace deal after talks in Istanbul in late March. At that time they inked a proposed agreement, which would have given Ukraine international security guarantees in exchange for neutral status.

Kiev pulled out of the talks soon afterwards, with Zelensky claiming that fresh evidence of war crimes allegedly committed by Russian troops had left him no other option. Moscow rejected the accusations, calling the evidence falsified.

“Not only did we listen, but we were prepared to make a deal on the terms that [the Ukrainians] proposed themselves,” Lavrov explained. “They were not allowed to do that because the war had not made enough profit for those who supervise and direct it.”

The Russian diplomat pointed to the US, and to a lesser degree the UK, as parties who are allegedly directing Ukraine’s actions. Washington pursues its goals of weakening Russia and benefiting from arms sales at the expense of the Ukrainian people, he said.

Lavrov added that the US and its allies have a pattern of rejecting ways to reduce tensions with Russia. Hostilities in Ukraine started after they refused to heed Russian warnings that the expansion of NATO was crossing a red line, he insisted. The military bloc brushed aside a proposed security deal, which in Russia’s view would have addressed the issue. (RT)