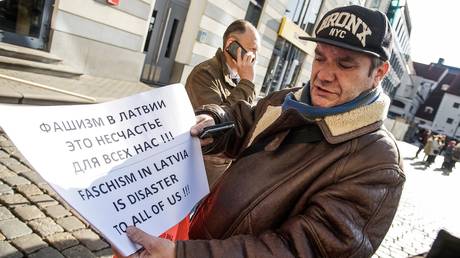 A participant prepares to take part in a rally against government's plans to switch Russian-language schools to Latvian, in Riga, Latvia. © Sputnik / Sergey Melkonov

A bombshell report by Europe’s human rights watchdog has slammed Latvian politicians for creating a hostile environment toward native Russian speakers, who make up around one in four of the former Soviet Republic’s population.

The new research from the Council of Europe, founded in the wake of WWII to uphold the rule of law across much of the continent, was adopted by a Committee of international ministers on Wednesday. It found that, while the Baltic country is making “sustained efforts” to teach Latvian to minority groups, its efforts to homogenize society are infringing the rights of Russian-speakers.

“Society in Latvia continues to struggle with the consequences of past divisions,” it argued, with “the Latvian majority and the Russian minority holding different geopolitical viewpoints and cultural identities. Persons belonging to each of these groups have significantly different perceptions of history and of the state in which they would wish to live. Attempts to create a cohesive society based on civic identity have not advanced significantly in recent years.” (RT)