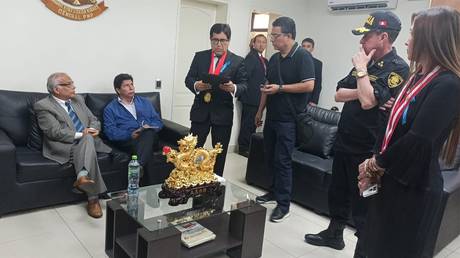 Peru’s Congress has impeached and ousted President Pedro Castillo from office after he tried to temporarily shut down the government’s legislative branch and call for new elections.

Lawmakers moved ahead with their impeachment trial on Wednesday, ignoring Castillo’s decree to suspend the body, and voted overwhelmingly (101-6) to oust him. The Congress then swore in Vice President Dina Boluarte to replace Castillo, making her Peru’s first female president.

Footage posted on social media showed Castillo in law enforcement custody, unrestrained at a Lima police station, though authorities haven’t clarified whether he’s being detained. Peru’s armed forces and national police issued a joint statement earlier on Wednesday, rejecting his attempt to replace the opposition-controlled Congress with an “exceptional emergency government.” Lawmakers had previously tried twice to impeach him since he took office in July 2021.

“There has been an attempted coup that has not found an echo in the institutions, nor in the street,” said Boluarte, a 60-year-old lawyer who was sworn in as president through 2026. She called for a political truce while she forms a new cabinet with representation from multiple parties. “What I ask for is a space, a time to rescue the country.”

Prior to Castillo’s ouster by lawmakers, US Ambassador to Peru Lisa Kenna urged the president to reverse his decision to shut down Congress. “We encourage the Peruvian public to remain calm during this uncertain time,” she said. “The United States categorically rejects any extraconstitutional act by President Castillo to prevent Congress from fulfilling its mandate.” 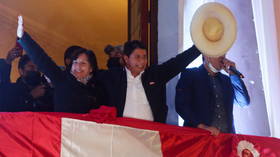 Castillo had become the latest in a series of Peruvian leaders to be accused of corruption. Prosecutors filed a constitutional complaint against him in October, alleging that he led a “criminal organization” that took bribes for government contracts and blocking of investigations. Congress demanded last week that he respond to allegations and accused him of “moral incapacity.”

The former teacher denied the allegations and said political opponents were trying to subvert the will of voters who elected him. (RT)