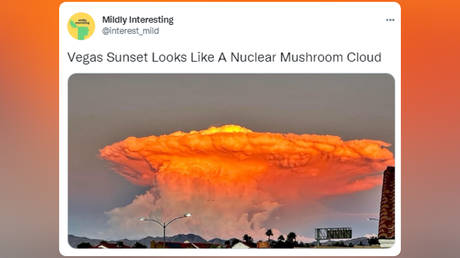 People in Las Vegas shared photos of a mushroom-shaped cloud billowing on the horizon on Sunday, with some joking that it reminded them of nuclear tests — one of Sin City’s tourist attractions in the 1950s.

The unnerving sight was apparently made more eerie by rays of the setting sun coloring the cloud various shades of orange.

Thunderclouds can take a mushroom-like shape when an upward current draws them to a higher altitude but at which there is no strong wind to blow them away. The San Diego office of the National Weather Service shared a photo of a similar-looking cloud on Monday, but without the dramatic lighting, as it moved west over California.

The US tested over a thousand nuclear devices at its Nevada Test Site, 65 miles northwest of Las Vegas, over four decades. The infamous mushroom clouds were easily visible and became a tourist attraction for the city.

Thunderstorms are beginning to form in the mountains this afternoon! ⛈️Check out this nice view from our office of the thunderstorm currently on the Riverside/San Diego County line. #cawxpic.twitter.com/igGWQOOS9v

When it ratified the 1963 Partial Nuclear Test Ban Treaty, the US pledged not to conduct most kinds of nuclear tests. The US carried out its last underground nuclear test in September 1992. Four years later, Washington signed the Comprehensive Test Ban Treaty, which forbids all detonations anywhere, though it has still not ratified the treaty. (RT)