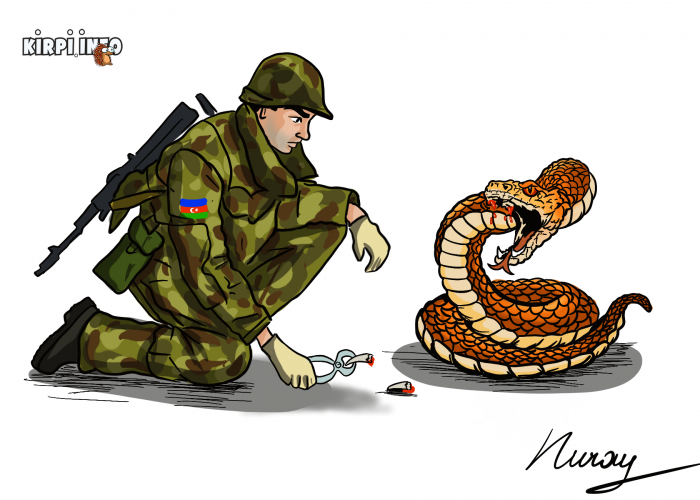 “The enemy has been silenced by retaliatory fire” – this expression, after all, should have been a thing of the past…But not: We still here this expression; Sometimes, we often hear this expression during the post-conflict period. We even have a martyr as a result of enemy fire…What is happening?

First of all, there is a need to give a legal explanation of this situation. Where did the fire open? If the fire was opened from the territory of Armenia, it is practically a foreign intervention, and this incident should be legally assessed. Each country, including Azerbaijan, has the right to self-defense against foreign intervention. However, to determine this, it is necessary to draw a clear boundary line. If there is no border, then there is a line of contact of troops, and no one can guarantee that there will be no firefights here.

In the past, there was a phrase “The international community must put pressure on Armenia” that was often used in the language of our diplomacy and journalist. Now, this phrase again becomes topical, this time, for the determination of borders. The world community, of course, will not put pressure on Armenia in this matter either. After a while, Azerbaijan must use a tried and tested method.

The problem stems from a serious desynchronization between the two sides’ agendas. We have announced the beginning of the post-conflict period, and Armenia is still in a period of conflict and does not want to leave. Azerbaijan has won the war with dignity and is now behaving with the dignity of a winner, waiting for all the principles of victory ethics. Armenia, on the other hand, won the first Karabakh war without dignity, lost the second war without dignity, at least now, following the principles of the ethics of defeat, could at least regain the dignity it lost, but awful …

In any war there is a winner and a loser. After the end of hostilities, each side must act in accordance with its obligations. The defeated side must accept and agree to the terms of the peace agreement. Having suffered a heavy defeat, Armenia does not want to recognize the borders of the victorious country.

It is impossible to explain this situation logically. It can only be explained that Armenia acts like this, being dependent on someone. However, depending on who? Obviously, Russia is not interested in the development of processes in such a way. Currently, only France openly supports Armenia’s claim that “conflict has not ended”.

Azerbaijani president repeated this question several times: “How do those, who claim that ‘conflict has not been resolved’ imagine the settlement of the conflict? Karabakh will not be granted special status in any case. Those who are well-aware of Azerbaijani president, his character and principles know it well. Status of Karabakh could be a topic of negotiations before the war. However, Armenia violated the negotiations. It is impossible to grant any status to Karabakh after Azerbaijan’s liberation of its lands by fighting. It has no political and legal basis. So, what is necessary to resolve the conflict? What is left?

Read more:   Gas prices rise in Bulgaria due to delay in IGB's launch

There is only one way out of this deadlock. The defeated side must act in accordance with the norms of defeater. Armenia knows that it is defeated, but doesn’t want to accept it. Armenia must accept the reality. Otherwise, it will be inevitable to avoid the next clash sooner or later. It is no exception that someone needs it. That “side” is not Azerbaijan. In fact, not even Armenia. The sooner they understand this, the better.