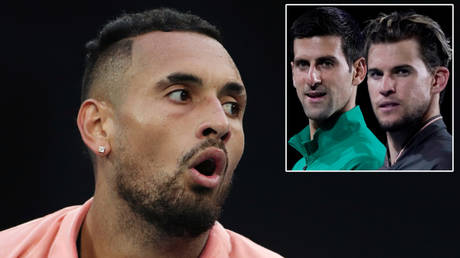 Australian Open finalist Thiem, who played in the Adria Tour event that resulted in a string of positive tests for Covid-19, accused Kyrgios of “interfering” over his fierce criticism of Zverev after the German was caught partying when he was supposed to be isolating following his participation in the tournament.

Thiem claimed it was “bad luck” that Zverev had been filmed socialising after promising to quarantine for two weeks in line with guidance for people who come into contact with those diagnosed with Covid-19.

“Kyrgios did a lot of mistakes himself,” added Thiem in an interview, referring to Kyrgios’s penchant for misbehavior on and off court. “It would be better for him to come clean instead of criticizing others.”

What are you talking about @ThiemDomi ? Mistakes like smashing rackets? Swearing? Tanking a few matches here or there? Which everyone does? None of you have the intellectual level to even understand where I’m coming from. I’m trying to hold them accountable.

This just shows what a joke @ThiemDomi@AlexZverev & @DjokerNole think this is, 2 of them partying like potato’s during a global pandemic. People losing lives, loved ones and friends, and then Thiem standing up for the ‘mistake’🤦🏽♂️ these guys are the ‘top’ of our sport. SMH

The Australian repeated his unsparing approach to remarks made by former champion Boris Becker last month, asking Thiem: “What are you talking about?

“Mistakes like smashing rackets? Swearing? Tanking a few matches here or there, which everyone does?

“None of you have the intellectual level to even understand where I’m coming from. I’m trying to hold [players] accountable.”

Minutes later, Kyrgios, who had called the tournament “boneheaded” and warned people not to question his past misdemeanors after Djokovic and his fellow players were filmed frolicking in a nightclub, thundered: “This just shows what a joke Thiem, Zverev and Djokovic think this is.

“Two of them partying like potatoes during a global pandemic. People losing lives, loved ones and friends, and then Thiem standing up for the ‘mistake’.

“These guys are the ‘top’ of our sport. Shaking my head.”

Kyrgios also emphasized his opposition to the US Open going ahead in New York as planned from the end of August, which has been granted permission by state leaders.