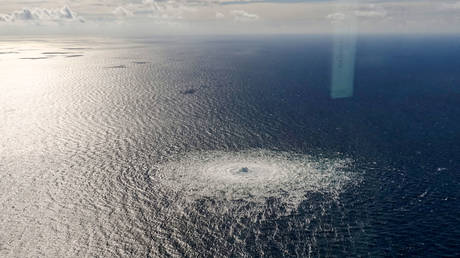 This handout picture released on September 27, 2022 by the Danish Defence Command shows the gas leak at the Nord Stream 2 gas pipeline as it is seen from the Danish Defence's F-16 rejection response off the Danish Baltic island of Bornholm, south of Dueodde. ©  Handout / DANISH DEFENCE / AFP

Damage to the natural gas pipelines will bring nothing but ruin for both Russia and EU, says spokesperson Dmitry Peskov This handout picture released on September 27, 2022 by the Danish Defence Command shows the gas leak at the Nord Stream 2 gas pipeline as it is seen from the Danish Defence’s F-16 rejection response off the Danish Baltic island of Bornholm, south of Dueodde. © Handout / DANISH DEFENCE / AFP

Moscow has denounced as “stupid and absurd” any allegations of its being behind the suspected explosions of the Nord Stream natural gas pipelines earlier this week, stating that the incident actually creates many issues for Russia.

Speaking to journalists on Wednesday, Kremlin spokesperson Dmitry Peskov explained that the damage to the pipelines posed a “big problem” for Russia as it had essentially lost its gas supply routes to Europe.

Read more:   Next meeting of Azerbaijan-Armenia border commission to be held soon

Both lines of the Nord Stream 2 pipeline were pumped full of gas and were prepared to deliver it to Europe at the time of the alleged explosion, said Peskov, adding that “this gas is very expensive and now it is all going up in the air.”

Peskov also noted that neither Russia nor Europe had anything to gain from the destruction of the pipelines, especially Germany, for which this incident poses a threat to the future development of its industry, as well as its profitability and competitiveness.

American LNG suppliers, on the other hand, have been making incredible profits after having multiplied their deliveries to the European continent, Peskov pointed out, adding that these companies are “very interested in maintaining these super-duper profits in the future.”

While no suspects behind the incident have officially been named, the Kremlin spokesperson advised against making any official announcements before a proper investigation into the incident is carried out. 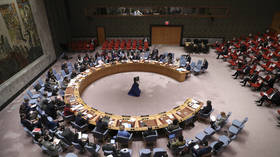 Peskov did, however, draw attention to US President Joe Biden’s statements from early February, when the American leader threatened to “bring an end” to Nord Stream 2. “What the US president meant by that, we don’t know,” admitted the Kremlin official, but highlighted the “borderline insane hysterical-euphoric reaction” of Polish officials who have already thanked Washington for sabotaging the pipeline.

The Kremlin’s response comes after some European and Kiev officials, including President Vladimir Zelensky’s adviser Mikhail Podolyak, suggested that the attack on the pipeline was a “false flag” operation carried out by Russia in order to make Ukraine look bad and to further drive energy prices up in the EU.

However, after the former Polish FM publicly thanked the US for the apparent sabotage on Twitter, Russian Foreign Ministry Spokesperson Maria Zakharova urged the EU to treat the US as the possible culprit behind the attacks on the Nord Stream pipelines. She said Moscow would call for a UN Security Council session over the incident.

A number of Western nations have repeatedly opposed Russia’s undersea pipelines delivering gas to Europe, both before and after Moscow launched its military operation in Ukraine. The recently built Nord Stream 2 network, which never went into operation due to Germany’s refusal to certify it, has drawn particular opposition from countries like the US and Poland, which has called for the pipeline to be “totally scrapped.” (RT)