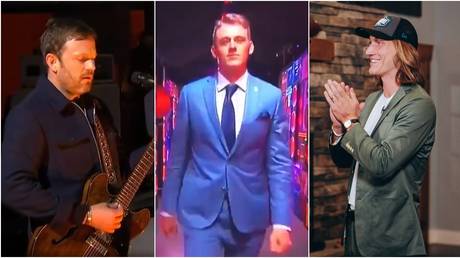 The NFL 2021 draft in Cleveland was action-packed, as King of Leon bombed, New England’s new quarterback Mac Jones had fans in hysterics, and hotly-tipped Trevor Lawrence surprised nobody by being the first overall pick.

The evening kicked off with the aging indie rock playing a poorly-received set that included the songs ‘Echoing’, ‘Stormy Weather’ and ‘The Bandit’ from their new album ‘When You See Yourself’, which will be released as an NFT.

Fans complained that the Memphis band, who enjoyed great success in the 2000s, were “outdated” and had ruined the draft before it had even had the chance to get off the ground.

“You cannot say an event begins at 8pm and then have Kings of Leon still on stage at 8:10pm,” commented one detractor.

To their dismay, the mini-concert delayed the first pick by almost 20 minutes.

Everyone tuned into the draft to watch Kings of Leon.Not.

kings of leon at the nfl draft??? pic.twitter.com/JaqqOFSHBd

you cannot say an event begins at 8pm and then have kings of leon still on stage at 8:10pm

You know your brain is broken when Kings of Leon come on stage at the NFL draft and all you can see is pic.twitter.com/Vu7ZqAnjl8

To the surprise of nobody, though, that saw the Jacksonville Jaguars, who finished last season 1-15, choose Trevor Lawrence first overall.

Considered to be one of the best high school football prospects of all time, the 21-year-old who led his college Clemson to the finals of the 2020 National Championship and 2021 Sugar Bowl is tipped as a superstar in the making, plus the most-ready of the quarterbacks that were drafted for the demands of the NFL.

LETS GOOOOO!!!!!!! So excited to be in Jacksonville. The best is yet to come. #DUUUVAL Let’s work. pic.twitter.com/jMSrFbiyiH

The 2021 edition of the event which allocates university talent to professional teams saw QBs take up the top three picks for the first time since 1999, with Zach Wilson heading to the New York Jets and Trey Lance joining the San Francisco 49ers elsewhere.

Yet the most viral shotcaller of the evening was Mac Jones – and not just because it was the first time New England Patriots coach Bill Belicick had ever drafted a first round quarterback.

“With the 15th pick in the 2021 #NFLDraft, the 6X World Champion New England Patriots select @MacJones_10.” 📺: #PatsDraft on NFLN/ESPN/ABC pic.twitter.com/juGmJ893Uj

Making his way to the stage to be greeted by a vaccinated NFL commissioner Roger Goodell, the Alabama Crimson Tide star creased viewers with a strut that was compared to “a high school administrator who needs to break up a fight in the cafeteria”.

Others remarked he did an “in a restaurant headed to the bathroom walk”, or appeared he was about to “tell on someone”.

“Mac Jones’ body type is ‘aunt’,” it was also pointed out.

And in order to fill the cleats of GOAT Tom Brady, he will need to be faultless.

Mac Jones walking like a high school administrator who needs to break up a fight in the cafeteria pic.twitter.com/03f7OkBnjm

Mac Jones had that, in a restaurant headed to the bathroom walk. #NFLDraftpic.twitter.com/th2hQalh2v

The unofficial award for Most Heartwarming Tale of the night went to Kwity Paye.

Born in a Guinea refugee camp during the Liberian Civil War, the former Michigan defensive end fled to Rhode Island with his mother when he was just six months old.

Snapped up by the Indianapolis Colts as pick 21, he told his beaming mother Agnes, who worked three jobs to fund his college education, that she has now “retired” from work, in what was dubbed an “amazing moment”.

New Colts pass rusher Kwity Paye telling his mother that she’s done working and will be retiring is an amazing moment 🙌 pic.twitter.com/Bti1MHWBmn

“For my family, she’s done working,” he stated, as Agnes danced with the Paye clan cheering and dancing in delight. “She’s retired.”

“Once it was announced I got picked, I turned around and saw my family there. It was a heartwarming moment,” Paye explained of the moment at a press conference afterwards.

“That’s when I started to remember all the long nights and all the hard work I put in throughout the years.”

“I do this all for her, so that one day, she’ll never have to lift a finger again.”Through the pain, struggle, and sacrifice, @OfficialKwity ’17 delivers on his promise. He’s drafted into the @NFL as a member of the @Colts! pic.twitter.com/jDfGTmpwG3

“It’s a dream. I wanted my son to succeed this way,” his mother Agnes confessed to the Providence Journal.

“As a little girl, separating myself from my family at a young age, God gave me an opportunity to risk myself for my own kids so I could see them get to this point. I’m very, very happy,” she gushed.

“I’m overwhelmed. I’m so happy for him,” Agnes went on. “I know God put him in the right people’s hands to make this happen for him.”

Kwity Paye (@OfficialKwity) told me earlier today that Chadwick Boseman being the first Black superhero meant the world to him, so his draft suit reflected that. Suit was made by former Packers player Adonis Jennings pic.twitter.com/tqZ7qLfnio

Asked for his thoughts by the same regional newspaper, Buddy Croft, the father of Paye’s Bishop Hendricken High School coach Keith said: “If the best Hollywood writers all sat down and tried to write this script, they couldn’t write a script better than what happened tonight.”

“He’s just a wonderful young man and he deserves this,” Croft concluded, on the Ocean State’s highest-drafted player in the Super Bowl era. (RT)