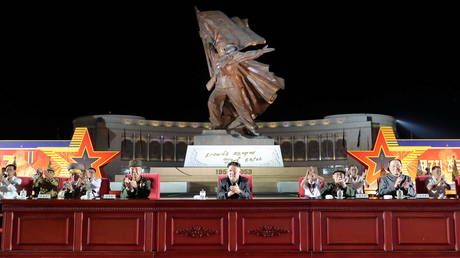 North Korean leader Kim Jong Un at a ceremony at the Victorious Fatherland Liberation War Museum to mark the 68th anniversary of the Korean armistice in Pyongyang. © Reuters / KCNA

North Korean leader Kim Jong-un said that the country is facing war-like hardship during the global pandemic at his address at a ceremony marking the 68th anniversary of the Korean War.

“We are faced with difficulties and hardship caused by the unprecedented global health crisis and prolonged lockdown no less challenging than how it was during the war,” Kim told thousands of veterans and guests from a tribune erected at the foot of the Monument to the Victorious Fatherland Liberation War in the capital Pyongyang on Tuesday.

The North Korean leader promised that “just like the generation of victors… our generation will continue this beautiful tradition and turn this difficult decisive period into an even greater new victory.”

It’s not the first time that Kim, who, according to estimations by South Korean intelligence, has lost 10-20kg in recent months, has acknowledged that his country is going through a tough period. In April, he called it “the worst in history.” And, last month, the supreme leader warned that the food situation was “getting tense” in the country, but attributed the issue to the aftermath of last year’s typhoon.

According to South Korean media, food prices have skyrocketed in the North, with a kg of bananas costing $45. The UN special rapporteur on human rights in North Korea, Tomas Ojea Quintana, even urged the UN Security Council last year to reconsider the international sanctions imposed on the country over its nuclear and missile developments in order to avoid a famine. (RT)