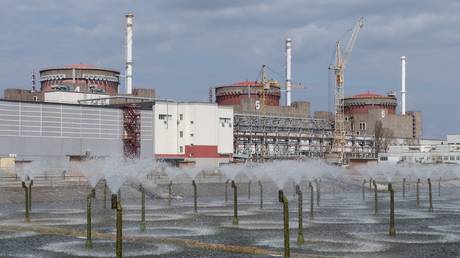 A view shows the spray pounds at the Zaporizhzhia nuclear power plant. © Sputnik

Ukraine’s forces are making the situation around the Zaporozhye facility much more dangerous, the Russian Foreign Ministry says A view shows the spray pounds at the Zaporizhzhia nuclear power plant. © Sputnik

Kiev is holding all of Europe hostage by carrying out strikes on the Zaporozhye nuclear power plant, Russia’s Foreign Ministry said on Monday, noting that the situation around the facility is growing increasingly dangerous due to increased activity from Ukrainian forces.

Russia has long been calling on the international community to condemn the unrelenting military strikes being carried out by Kiev on the grounds of the plant, Russian Foreign Ministry spokeswoman Maria Zakharova noted in a statement posted on the ministry’s website. (RT)