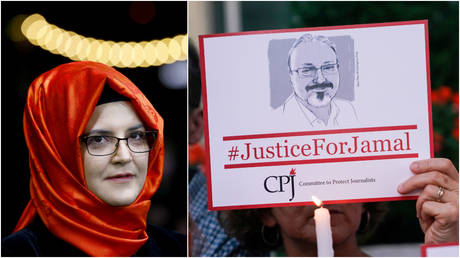 The fiancee of murdered journalist Jamal Khashoggi has sued Saudi Crown Prince Mohammed bin Salman and more than two dozen aides and officials in an American court, accusing them of planning and executing the assassination.

The civil suit was filed on Tuesday by Hatice Cengiz, the late journalist’s fiancee, alongside the NGO he founded in the months before his death, Democracy in the Arab World Now (DAWN), both seeking unspecified damages against bin Salman and 29 Saudi officials.

“The suit seeks to hold accountable those responsible for the brutal premeditated kidnapping, torture, assassination and dismemberment of a US resident, Mr. Khashoggi,” a lawyer for Cengiz, Keith Harper, said at a news conference. “This lawsuit is also a search for the entire truth.”

The 30 defendants named in the complaint are alleged to have acted “in a conspiracy and with premeditation” to kill the Washington Post columnist, while bin Salman is accused of ordering the murder as a way to “halt Mr. Khashoggi’s advocacy in the United States, principally as the Executive Director of Plaintiff DAWN,” arguing the crown prince viewed the org as an “existential threat.”

Though bin Salman has accepted responsibility for the death, saying it “happened under my watch” as crown prince, he has repeatedly denied ordering Khashoggi’s killing himself, which he deemed a “heinous crime.” (RT)