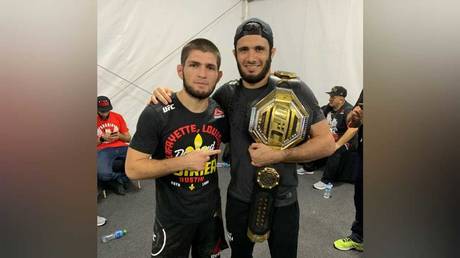 Khabib teammate Islam Mamedov was forced out of his fight in Dubai. © Instagram @islam_mamedov

UAE Warriors lightweight Islam Mamedov – a teammate of UFC champion Khabib Nurmagomedov – was forced to pull out of his planned co-main event contest in Dubai on Friday after reportedly collapsing due to a tough weight cut.

Dagestani fighter Mamedov was due to face South Korea’s Kyung Pyo Kim at Rotunda Caesars Palace in Dubai, but according to MMA reporter John Hon Ko, he suffered problems attempting to make weight.

The 30-year-old Mamedov was replaced at just four hours’ notice by Uzbek fighter Shamil Aminov, who suffered a first-round submission defeat in what was his first professional MMA contest.

Kyung improved his record to 10-2 with the victory, but was evidently faced with a far more straightforward prospect than the one he had been preparing for, after the vastly more experienced Mamedov was forced to pull out.

Mamedov had been aiming to improve his record of 18 wins, one defeat and one loss in his 20 pro outings.

The Derbent-born fighter wasn’t the only member of Khabib’s training team to suffer weight-cut woes in the UAE this week.

UFC featherweight Zubaira Tukhugov missed weight for his clash with Canada’s Hakeem Dawodu this weekend at UFC 253 in Abu Dhabi.

Tukhugov tipped the scales on Friday at four pounds over the featherweight limit, and will be forced to forfeit part of his fight purse for what will now be a catchweight contest with Dawodu.

UFC lightweight champion Khabib, who is preparing to face interim title holder Justin Gaethje in Abu Dhabi on October 24, was cageside on Friday at UAE Warriors alongside his coach Javier Mendez and members of his team.

“My preparations are going very good. Right now it’s one month before the fight in Abu Dhabi. I feel great; my shape is very good. I’m very excited for this,” Khabib said of his upcoming contest with Gaethje.

“All the time I came back to the UAE and fighting in Abu Dhabi, for me it’s like I’m fighting in my home. I feel great being here, with these people and I thank you very much you guys.” (RT)