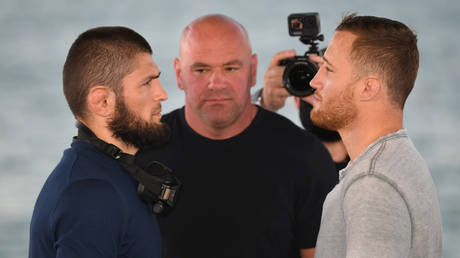 Khabib Nurmagomedov praised Justin Gaethje’s striking ability ahead of their meeting at UFC 254 on Saturday, but he remains confident in his ability to take the fight to the mat and win it with his wrestling skills.

At their pre-fight press conference in Abu Dhabi on Wednesday, the Russian was asked about the American’s striking ability and he was complimentary of his opponent.

“I think he has dynamite in his hands, very good kick, they are all good when they stand up, but when I grab them it changes a little bit,” Khabib said. “I think more than Dustin [Poirier], Conor [McGregor] and other guys he knows how to wrestle, it’s gonna be a little bit hard, but I prepared myself to try to take him down 100 times.”

The 28-0 fighter then playfully interrupted when Gaethje was asked the same question about him to add: “Be careful with my jab brother, I have a good jab.”

As for ‘The Highlight,’ he was similarly positive about Nurmagomedov’s skills, but he is not expecting much striking from him.

“He has a lot of good things, everything’s unorthodox at different times. Everything in there is timing, timing and space are the most important factors when you’re in a fight, and I believe he’s world class in that regard.

“It doesn’t sound like he’s planning on striking much, he said 25 minutes on the ground.”

Also on rt.com ‘Khabib is on the way to GOAT status if he beats Justin Gaethje’ – Dana White ahead of UFC 254 showdown

Indeed, earlier in the presser, ‘The Eagle’ was asked about the difference between his brand of wrestling and American wrestling, to which he had responded: “I think it’s a big difference, and I know he knows how to wrestle, but what about wrestling for 25 minutes?”

“I’m going to go all night…” he added. “This is the big difference between US wrestling and Dagestan wrestling.”

Gaethje is acutely aware that Nurmagomedov will look to take things to the mat when they face off in the Octagon.

🔥 Khabib & Justin Gaethje face off ahead of #UFC254!@TeamKhabib@Justin_Gaethjepic.twitter.com/2MVGQbzYNR

The Russian is known for his grappling ability and he has won 10 fights via submission including his last two against Poirier and McGregor.

Gaethje is prepared to fight fire with fire, but he’s also aiming to get some strikes in too.

“He hasn’t fought somebody that has wrestled or grappled as long as he has,” he said. “That’s me. I have. Everyone says they’re ready, I will not allow him to put me on the fence. If I do, then I’m screwed. So my gameplan is if he wants to grapple, let’s grapple in the middle.

“I’ve said 1000 times, I cause damage. I have dense bones, and I’m going to kick his legs. That’s where it’s gonna start and then move on from there.”

👊 Khabib says ‘it’s a bit difficult to fight these days’ ahead of #UFC254pic.twitter.com/3jkioBIf8h

The 31-year-old is 22-2 in MMA, and 19 of those victories have come via knockout as opponents succumbed to his well-placed punches and leg kicks.

He earned a shot at Nurmagomedov’s lightweight belt when he beat Tony Ferguson to win the interim title back in May via a fifth-round TKO.

Gaethje is proud to be representing the US at Fight Island ahead of the veteran,

“I’m not even supposed to be here,” he said. “This is supposed to be Tony Ferguson. Thank God I got that opportunity and I took it from him, I took his soul.”

Also on rt.com ‘I could rattle off numbers all day’: UFC boss White lists incredible Khabib stats as he calls him ‘one of sport’s BIGGEST stars’

As for Nurmagomedov, he is expecting Gaethje to fly out of the traps in the first round on Saturday, but he isn’t sure he’ll be able to sustain that kind of intensity as the fight wears on.

“He always begins very fast, first round he’s very dangerous,” he said. “I think he and Conor are the two most dangerous guys in the first round. But if you’re talking about second round, third round, they become a little bit like regular fighters.”

Nevertheless, he believes he’s in for a difficult test at UFC 254: “My opponent is a very tough guy, he knows how to wrestle, how to kick, how to punch, he’s the complete MMA fighter. He’s the interim champ, a very big name.”

Also on rt.com Pick Khabib’s opponent for 30-0 fight at your peril – Gaethje has already ripped up one script, and is ready to do the same again

The Dagestan native will be looking to defend his lightweight title for the third time when they step into the Octagon, as well as extend his perfect record to 29 fights unbeaten in MMA and 13 in UFC.

It will also be his third fight in succession against a previous holder of the title or interim title.

“He’s finished a lot of great opponents, a lot of great guys… He was a great champion,” Nurmagomedov added on Gaethje. “To beat a guy like Justin Gaethje is gonna be big for my legacy.” (RT)