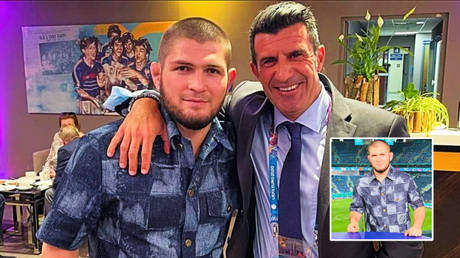 Football legend Luis Figo has told Khabib Nurmagomedov that it was “really nice” to meet him before they watched Russia play Belgium at Euro 2020 – although the UFC icon is not tipping Figo’s beloved Portugal for glory.

Suited Figo put an arm around Nurmagomedov, who was wearing an eye-catching shirt, as they attended Russia’s vanquishing by top-ranked Belgium at the Gazprom Arena in St. Petersburg on Saturday, where the former Portugal magician was working as an ambassador for tournament organizers UEFA.

Ex-lightweight king Nurmagomedov called Figo “just legend” as he shared the snap with his millions of followers, highlighting his love of football again on an Instagram account where he has pictured himself with the likes of Cristiano Ronaldo and, earlier this season, Paris St. Germain goalkeeper Keylor Navas.

“Bro, really nice to see you again,” wrote the fawning Figo, who won the Champions League with one of the teams Nurmagomedov supports, Real Madrid, as part of a glittering career that included highly successful spells at Sporting Lisbon, Barcelona and Inter Milan.

Also on rt.com ‘I will accept this’: Ex-UFC star Khabib says he’s open to switching to football if he gets good offer

The tournament veteran wore a suit and beamed at the camera on a night when Russia’s team had little to smile about.

Easing to a 3-0 victory with the help of two Romelu Lukaku goals in both sides’ first match of the finals, Belgium underlined their capacity to contend for the title – proving Nurmagomedov’s words before kick-off somewhat prophetic.

As ever, the unbeaten Dagestani was popular with journalists in the build-up to the game, and he backed two teams to go all the way at the showpiece.

“I’m at the stadium, I’ve given a couple of interviews and I’m waiting for the start of the historic match of the Russian national team,” said Nurmagomedov, standing behind a table in a broadcasting studio.

“So who do you think will win the main trophy in Europe? My personal opinion is England or Belgium.”

Nurmagomedov also used the message to personally wish Russia’s Georgi Dzhikiya well in stopping in-form Lukaku, although the Spartak Moscow star and his fellow defenders ultimately suffered the same fate as many backlines have when attempting to thwart the Inter striker in recent times.

England also won on Sunday, albeit in less convincing style courtesy of a 1-0 win against Croatia at Wembley.

Bookmakers widely agree that England and Belgium are among the favorites, although they unanimously suggest that 2018 World Cup winners France are most likely to become champions.

Nurmagomedov was in Moscow to watch Les Bleus lift that most recent trophy, joined by the likes of former arch-rival Conor McGregor and Russian president Vladimir Putin on that occasion.

Figo was in London to watch England’s win on Sunday, and could be in Budapest to see Cristiano Ronaldo and company on Tuesday, when his homeland’s hopes of retaining their title will be tested by Hungary in their first match.

Nurmagomedov is likely to be keen to attend more matches at Euro 2020, including Russia’s next attempt to put points on the board when they are in St. Petersburg again to play Finland on Wednesday. (RT)