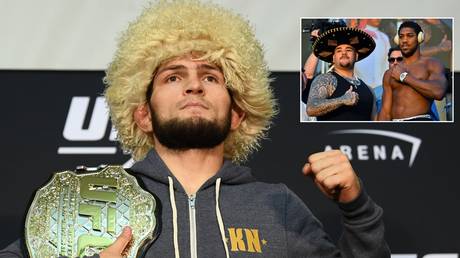 UFC lightweight champion Khabib Nurmagomedov appears to have a ticket to the hottest show in town on Saturday night, as he posted a photo to social media of him landing in Saudi Arabia ahead of Saturday’s heavyweight title bout.

Before his own world title defense against Tony Ferguson next April, Khabib touched down in Saudi Arabia ahead of one of the most fiercely anticipated heavyweight title bouts in a generation when Anthony Joshua attempts to reclaim the titles he surrendered to Ruiz via seventh-round TKO last summer.

Also on rt.com UFC 249: Khabib Nurmagomedov to kick off his training camp for Tony Ferguson at his brand new gym in Dagestan

And perhaps the Dagestani superstar would be the ideal person to lend advice to fighting in the type of climate expected on Saturday following his own world title fight against Dustin Poirier in Abu Dhabi last September, in which he was victorious by third round submission.

The picture posted to Instagram shows Nurmagomedov, along with several of his training partners, presumably arriving in Saudi Arabia via private jet.

Just landed at the desert.

Nurmagomedov will be a particularly interested spectator given his apparent ambition to try his hand in the boxing ring. There has been continuous speculation linking him with a crossover fight with Floyd Mayweather, though unlike chief rival Conor McGregor, neither he nor his management team appear to have made any great breakthroughs in arranging what would be a highly-lucrative superfight.

The Russian champion’s boxing aspirations will take second fiddle to his April encounter with Ferguson – the fifth time that the two standout lightweights have been scheduled to compete against each other. The four previous fights fell apart for a variety of reasons related to injury and bad weight cuts. (RT)