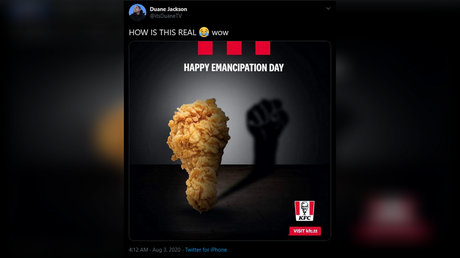 KFC Trinidad was grilled by angry social media users after the fast food chain marked a holiday celebrating the end of slavery with a BLM-inspired chicken ad. The company later apologized for the post.

The chicken chain’s Trinidad subsidiary apparently wanted to show solidarity during the Caribbean nation’s Emancipation Day, which commemorates the end of slavery in the colonies of the British Empire. In an Instagram post, KFC Trinidad showed a chicken drumstick with the silhouette of a ‘black power’ fist that has been recently popularized by the Black Lives Matter movement. “Happy Emancipation Day,” the graphic read.

It wasn’t long before the post caught the attention of internet users.

“This is the most racist thing I’ve seen a corporation do ever, how tone deaf are they?” asked one outraged Twitter user.

Others said the graphic was “distasteful” and “stupid.”

One observer argued that while the post would likely be considered racist in the United States or Europe, it matches the “sense of humor” in Trinidad and Tobago.

In case y’all didn’t realize, the website says https://t.co/b8RXhA9FWE (the .tt means Trinidad and Tobago). This would of been made by Caribbean people and is right up their alley for sense of humour in Trinidad. Now if this ad been made in USA or europe, then yes it’d be racist

Following the outcry, the company pulled the Instagram message and replaced it with an apology.

“Our intention was to support and recognise the importance of this historically significant event. We recognise that our posts commemorating Emancipation Day drew some negative responses. Clearly, we got it wrong and we want to unreservedly apologise for the offence caused,” the statement read. (RT)

“Azerbaijan is one of the most important countries for Latvia in terms of a partnership.…

Azerbaijan to open embassy in Cuba

Azerbaijan considers opening its embassy in Havana, Cuba. A draft law on this issue will…

Turkish Airlines will start operating special flights along the Ankara-Baku, and Baku-Ankara routes from October…

The Russian Aeroflot airline has resumed flights on the Moscow-Baku-Moscow route, the Heydar Aliyev International…

Azerbaijani President: Statements are not enough. We need actions

“Regretfully, the OSCE Minsk Group Co-chair’s activity has not yet delivered any results. Negotiations must…