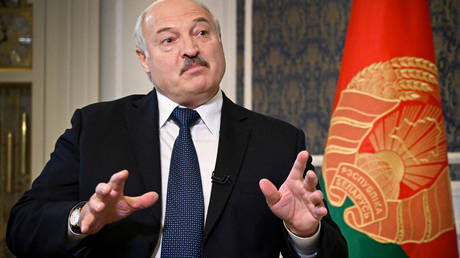 Belarusian President Alexander Lukashenko speaks during an exclusive interview with Agence France-Presse (AFP) at his residence in Minsk on July 21, 2022. ©  Alexander NEMENOV / AFP

The ball is in Kiev’s court if it wants to avoid complete ruin, the Belarusian president has said Belarusian President Alexander Lukashenko speaks during an exclusive interview with Agence France-Presse (AFP) at his residence in Minsk on July 21, 2022. © Alexander NEMENOV / AFP

Ukraine should do its best to end the conflict with Russia, Belarusian President Alexander Lukashenko said on Thursday, adding that failure to do so would bring about the total collapse of the nation.

Commenting on the hostilities in the neighboring country, the Belarusian leader noted that “everything is in Ukraine’s hands now.”

“If they [Kiev] don’t want people to die, and to die in huge numbers … It’s hard, but [the conflict] must be stopped, because the complete destruction of Ukraine will follow,” he said, speaking on the sidelines of the summit of the Collective Security Treaty Organization (CSTO) in Armenia. Lukashenko added that it is not just “the loss of statehood” that is at stake for Ukraine, but its very existence.

Read more:   Aussie PM plans to stop radical eco activists who want to tell people 'what you can say, what you can think'

He claimed that the Ukrainian people, who are bearing the brunt of the conflict, would eventually force President Vladimir Zelensky into a diplomatic engagement. “In one or two years, the people will be accusing him: ‘What did you do to start this war?’ 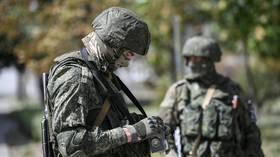 Ukraine conflict could end ‘in a few days’ – Lukashenko

According to Lukashenko, the situation will “press the Ukrainian leadership – if it is reasonable – into sitting at the negotiating table.”

After Russia launched its military campaign against Ukraine in late February, Belarus hosted several rounds of talks between Moscow and Kiev. At the time, however, these diplomatic efforts failed to garner any results.

In October, the Belarusian president claimed that while Minsk takes part in Russia’s military operation, its role is limited. He said that his country is preventing the conflict from spreading into its territory while making sure that “nobody would shoot Russians in the back from the territory of Belarus.”

In late September, he also claimed that the conflict could end “in just a few days” if Western powers were to back a peaceful settlement. This statement was to some extent echoed by Kremlin Spokesman Dmitry Peskov, who said last week that the participation of Western nations in dialogue could be a “guiding and reinforcing element.”

While Moscow has repeatedly signaled that it is open to negotiations, President Zelensky has set some conditions. They include the “restoration of [Ukraine’s] territorial integrity,” “compensation for all war damage,” and the “punishment of every war criminal.” (RT)