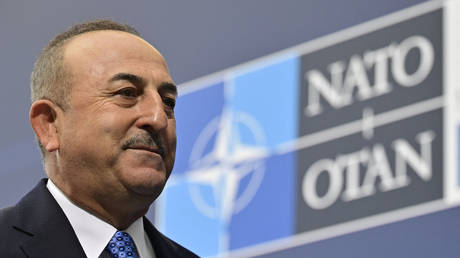 Turkey says written guarantees will be required from Sweden and Finland during a meeting on Wednesday FILE PHOTO> Turkish Foreign Minister Mevlut Cavusoglu at an informal meeting of NATO Foreign Ministers in Berlin. ©John MACDOUGALL / AFP

Delegations from NATO aspirants Sweden and Finland will meet top Turkish officials in Ankara on Wednesday to discuss Turkey’s objections to their membership in the alliance. The Turkish foreign minister said on Tuesday his country would demand guarantees from the Nordic nations on curbing “support of terrorism.”

Turkish Foreign Minister Mevlut Cavusoglu said his nation will seek written guarantees from Finland and Sweden that they will address Turkey’s concerns before their NATO accession can proceed. 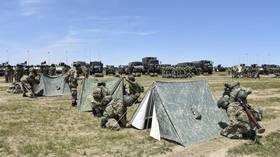 “We expect concrete steps, we cannot move forward with some good wishes,” he told CNN Turk. A four-way meeting involving a NATO representative may also take place, the minister added.

Ankara wants the two nations to take action against Kurdish militants, whom the Turkish government considers terrorists, and to lift restrictions on arms trade with Turkey, the minister said.

The statement stressed that Turkey has sought the extradition of wanted individuals from Sweden since 2017. It demanded that Sweden stop what Turkey described as financing of terrorist organizations and lift an arms embargo, imposed in response to Turkish military action in Syria in 2019.

Under the collective security principle of NATO, Türkiye expects concrete assurances from Sweden, which supports terrorist organizations. ⁰Stronger Together pic.twitter.com/Srj9kBLWak

Delegations from the Nordic nations will try to resolve Turkish “security concerns vis a vis terrorism”, Finnish Foreign Minister Pekka Haavisto said during a panel discussion at the World Economic Forum in Davos. “There might be also some issues that are not linked directly to Finland and Sweden but more to other NATO members,” he added. (RT)