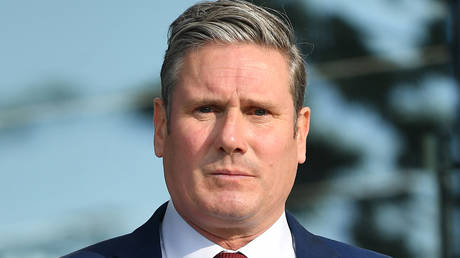 Labour Leader Keir Starmer’s speech, in which he suggested his party deserved to lose the 2019 election under Jeremy Corbyn’s leadership, has been ridiculed online as being self-defeating and full of “meaningless platitudes.”

“When you lose an election in a democracy, you deserve to,” Starmer said during a Tuesday press conference. He added that his fellow Labour officials should ask themselves “what [were they] doing” for it to come to this.

The opposition leader then lamented the losing streak his party is currently on, having lost four general elections in a row.

The self-deprecating speech with no policy specifics might have backfired, as Starmer was harshly mocked for it online. Many commenters took issue with him seemingly “blaming” Corbyn for the 2019 loss. Some even saw it as an apology for the former leader’s left-wing positions.

@Keir_Starmer You blame Jeremy Corbyn, you laughable oaf, and who will you blame for the droves who have left labour since you became its sorry excuse for a leader??

To philosopher Oliver Thorne Starmer’s speech sounded so defeatist, that he called it “a funny way to announce [his] resignation”.

Other commenters focused on the way Starmer brought up a number of concepts without going into any specifics, like “decency, fairness” and “opportunity.” They felt that the opposition leader seemed “fake” and full of “platitudes.” (RT)