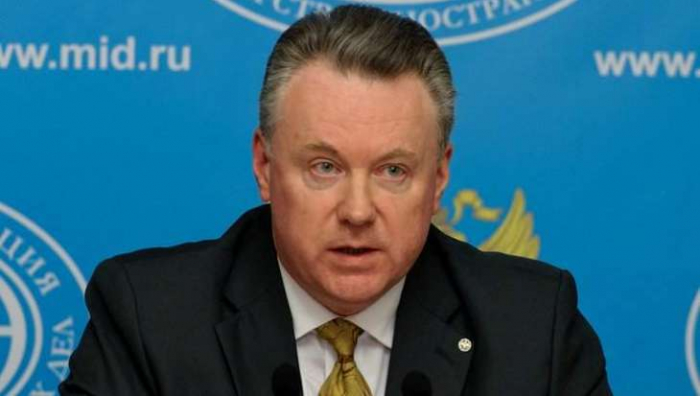 The settlement of the Armenia-Azerbaijan Nagorno-Karabakh conflict is one of Russia’s most important foreign policy priorities, Permanent Representative of the Russian Federation to the Organization for Security and Co-operation in Europe (OSCE) Alexander Lukashevich said.

Lukashevich made the remark at a meeting of the OSCE Permanent Council in Vienna, Trend reports on Nov. 8.

“We appreciate the efforts of the OSCE Minsk Group’s three co-chairs as a collective mediator in developing a viable solution to the Nagorno-Karabakh conflict by the parties,” the permanent representative said. “The active work of the mediators helps maintain an intensive dialogue between the involved parties, aimed at finding common ground on key aspects of the conflict settlement and developing confidence-building measures in line with the general goal of preparing the population for peace.”

Lukashevich stressed with gratification the preservation of relative stability on the contact line and the border of Azerbaijan and Armenia and the small number of violations of the ceasefire regime.

Read more:   WHO gives recommendations to Azerbaijan on cancellation of quarantine regime

“This is a sign of interest of the parties in finding a compromise at the negotiating table,” the permanent representative said. “We are convinced that maintaining and strengthening the ceasefire regime will contribute to the effectiveness of the mediation mission of the OSCE Minsk Group co-chairs.”

“We look forward to the implementation of the confidence-building measures which are being discussed between the parties,” Lukashevich said. “Mutual trips of journalists and possible exchange of the detainees could greatly contribute to the atmosphere of trust necessary for progress in the settlement.”

“It is important for the representatives of the parties at all levels to do everything to refrain from those statements and unilateral actions that are painful for the partners involved in the negotiations,” the permanent representative said. “It is not consistent with the task of creating the conditions necessary to promote the political settlement of the conflict.”

Read more:   UK Prime Minister's Trade Envoy: UK is ready and willing to help in any sector that Azerbaijan would like - INTERVIEW

“It is useful to return to the practical elaboration of an agreement fundamentally agreed by Azerbaijan and Armenia on expanding the OSCE’s ability to monitor the situation on the contact line and on the Azerbaijani-Armenian border,” Lukashevich said.

“The settlement of the Nagorno-Karabakh conflict is one of Russia’s most important foreign policy priorities,” the permanent representative said. “We intend to continue to render necessary assistance to the parties in developing a mutually acceptable basis for a viable compromise jointly and in coordination with other members of the OSCE Minsk Group besides three co-chairing countries.”