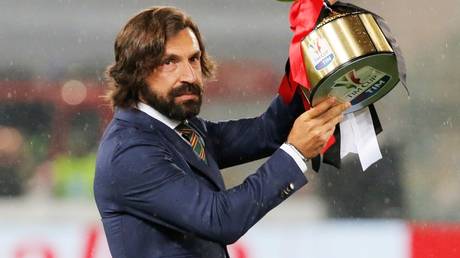 An announcement has not yet been made by the club, but it is widely understood that confirmation will soon be made that Pirlo will take up the Juventus hot seat following the sacking of Sarri earlier on Saturday.

The 41-year-old made 119 league appearances for “The Old Lady” of Italian football between 2011 and 2015 after joining the club from rivals AC Milan.

The playmaker, generally considered to be one of the best passers of a ball in the world during his peak years, was given his first managerial job by Juve just 10 days ago when he was appointed the club’s Under-23 coach.

But now the club has promoted him to the top job, before he even had the chance to lead the Under-23s in a match, and the club will hope that he can bring the sort of success to Turin that he brought during his playing days.

As a player, Pirlo won four back-to-back Serie A titles, as well as the Coppa Italia and two Supercoppa Italianas.

The two-time Champions League winner with Milan is also likely to be tasked with rejuvenating the club’s successes in European club competition. (RT)