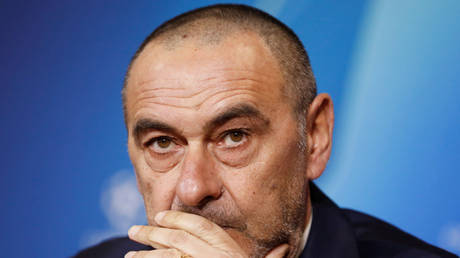 Juventus’s limp exit from the Champions League at home to Lyon in the round of 16 meant the writing was on the wall for Maurizio Sarri, and his words at the end of his first season appeared to compel the club to take swift action.

The clues to the future were in the more obvious details when Juventus won Serie A with two matches to spare at the end of June.

Hardly on champion form after beating midtable Sampdoria to record a second win in six games, Maurizio Sarri felt the need for a cigarette while his players were celebrating, even being denied that relief when his players threw a bucket of water on him.

Switching from a soaking to a damp squib of a celebratory interview, Sarri suggested that his players had won the title in spite of him, and alluded to showdown meetings that he had held in an attempt to correct Juve’s periods of stuttering form during the season, which perhaps succeeded as much because their rivals fell away as they did because of any inspirational exchanges.

Also on rt.com Maurizio Sarri SACKED by Juventus after Italian side crashes out of UEFA Champions League

Predictably reliant on Cristiano Ronaldo, Juventus were restricted to playing everything through their central luminary, a one-dimensional approach that lacked the fluidity of the ‘Sarriball’ style with which the Italian won Serie A Coach of the Year with Napoli in 2016.

When Ronaldo misfired, Juventus inevitably did too, culminating in a performance of anonymity by his standards in their Coppa Italia final stalemate and defeat on penalties.

The occasionally uninspiring tactics that earned Sarri criticism at Chelsea last season, and the pivotal played by Eden Hazard as his former side won the Europa League in style, seemed a minor headache compared to the nightmare that the final weeks of his reign at Juve became.

Most teams ease off the pedal once a title is secured, but Sarri’s side stalled after that win.

Ronaldo failed to score for a third game out of five in the 2-0 loss at Cagliari, which might have been understandable three days after winning the league had it not been followed by a first Serie A home defeat since 2018 on the last day, ending a run of 40 matches.

Sarri sacked. Even Juve know a league they’re winning for 9yrs in a row holds no value. Every season without UCL is a fauliure to JuventusJuventus bought CR7 to win the UCL so As PSG did with Neymar/Mbappe. CR7 and juventus needs someone Better to manage them 👌 pic.twitter.com/XsDmQEZHww

After two major trophies in as many years and plenty of £/€ he won’t be too dejected, but Sarri needs to pick a club that better fits the way he wants to play football next

Something was clearly amiss beyond a cursory glance at the final table, which left Juventus a point clear of Inter Milan and seven points worse off than they had finished under Max Allegri, who had won 11 trophies in four years before essentially being sacked at the end of last season for failing to win the Champions League.

Allegri had taken them to the quarter-finals before spurning a second-leg lead against surprise packages Ajax, and now they were left to pin their hopes on Sarri merely reaching that stage again by overturning a 1-0 first-leg at home to Lyon.

Had they achieved that and beaten Manchester City in a one-off quarter-final, there could have been more of a case for overlooking the apparent lack of progress and at least keeping Sarri until next season.

That would still have been a huge decision, leading to the possibility of selling Ronaldo for the sake of building a team and tactics less fixated around one superstar.

Thanks for everything, Mister Sarri. pic.twitter.com/Qt9O98bNkt

As it was, Sarri made it easy for the club president, Andrea Agnelli, to choose the man who Juve pay four times more than any other player over him.

Having almost dared the club to sack him on the eve of the round of 16 match, claiming that talk of his future was “offensive” to a board who would evaluate the entire season, he used his post-match interview to announce that the players had performed better than he had expected as they crashed out against the club that finished seventh in Lique 1.

There were minor mitigations – near-misses, dubious penalty calls in both legs, an injury to second-fiddle striker Paulo Dybala – but you can imagine the shudder Agnelli and his confidantes would have felt at Sarri’s words.

Whether they were an attempt to defend his players or a genuine admission of his own low expectations, Sarri could not have crafted more of an evident chasm between his own expectations and the ambitions of the club.

Perhaps, understandably, he had simply had enough of being asked whether he felt that anything other than being the best team in Europe was a failure.

Sarri is now in a happier position than Juve, who will gamble that a new man can take them further next season while hinging everything on the striker they have so much invested in.

The early favorite for the job is Mauricio Pochettino, a Champions League finalist with Tottenham last season, and there will be talk of Allegri returning, hastened by the comparative promise that last season now appears to have held, as well as his familiarity with the challenge.

While Sarri and Sarriball could rise again, his successor will face a foreboding task at a club obsessed with status and the cult of the individual. (RT)