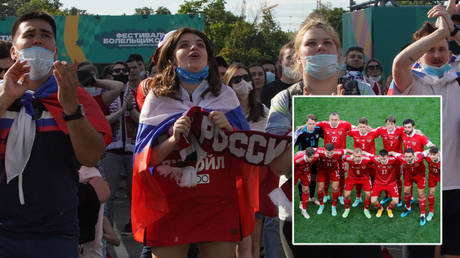 Russia recovered from a sobering 3-0 opening defeat to Belgium to edge past Finland in St. Petersburg in their second match of Euro 2020, seeing off their dangerous opponents with a sensational strike by Aleksei Miranchuk.

Stanislav Cherchesov’s men survived an early scare when Joel Pohjanpalo produced an expert close-range header to beat Matvei Safonov from a right-wing cross with a goal that was ruled out for offside.

Relieved Russia spent much of the rest of the half dominating possession without converting their superiority into a single shot on goal.

That all changed to glorious effect when Miranchuk played a nimble-footed one-two with Artem Dzyuba inside the penalty area, then curled a beautiful finish beyond Lukas Hradecky to send most of the Gazprom Arena crowd into raptures on the stroke of half-time.

Igor Diveev used all of his defensive nous to thwart Teemu Pukki after the interval with a perfectly-timed tackle after the striker broke free on goal.

The tournament co-hosts, though, could have gone further ahead, not least when Daler Kuzyayev collected a Dzyuba pass on the edge of the penalty area on the left and swung in a shot that seemed destined for the far corner of the net before Hradecky brilliantly intervened, springing to his left to palm the strike behind.

Despite securing their first three points, Cherchesov will be keen to address his players’ evident shortcomings in front of goal. Rifat Zhemaletdinov should have scored in added time, working his way past a couple of markers inside the penalty area before blasting a shot over the crossbar.