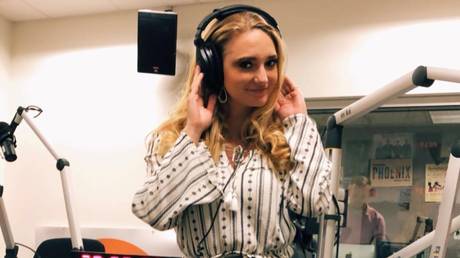 A journalism student at Arizona State University’s Cronkite School has been fired from her job as manager of the school-run radio station because of her tweet about black man Jacob Blake, shot by police in Kenosha, Wisconsin.

Rae’Lee Klein, who had been pressured to resign by administrators and the student board of directors at Arizona State’s Blaze Radio station, said Thursday that she had officially been removed from her position as manager. She said school officials, including interim dean Kristin Gilger, declined to tell her what rule or rules she had violated.

UPDATE: The Cronkite school has officially removed me from my position as Station Manger, despite refusal to inform me of what university/Cronkite rules I violated. Check out the article for the full details. As they know, this is far from over…https://t.co/sp9AvUrV72

The controversy began when Klein retweeted an article from the New York Post about Blake’s arrest warrant on August 28. The warrant included details about allegations of felony sexual assault against Blake, and Klein added a comment to her retweet saying, “Always more to the story, folks. Please read the article to get the background of Jacob Blake’s warrant. You’ll be quite disgusted.”

Klein later said in an interview that she was disgusted by the accusations against Blake, which included an alleged violent sexual assault of a woman in front of the woman’s child. But at the time of her tweet, Blake had become the inspiration for violent Black Lives Matter protests in Kenosha after police shot him seven times in the back during a struggle to arrest him.

A few days after the tweet, the six-member board of directors at Blaze Radio voted unanimously to call for Klein’s resignation and said it wouldn’t recognize her as manager if she refused. Former student directors of the station issued a statement in support of the decision, saying “students of color will not feel welcome” at the station as long as Klein remains manager.

The Cronkite School issued a statement Friday, denying that Klein had been fired from her position. “Any actions that are unfolding are not punishment for a tweet,” Gilger said in the statement. “I have been clear with Rae’Lee that she would not be removed as station manager… because of the views she expressed.”

But Klein’s Tweet Thursday included a screenshot of an email from Gilger, reminding her that “staying on as station manager is not an option.” The message was a response to Klein’s refusal of an earlier ultimatum to accept one of three options – being reassigned to another student job, remaining on the board in another capacity, or starting her own radio station. Gilger’s statement Friday said she had offered the student “numerous ways to resolve the situation that take into account the needs of all students involved in the Blaze Radio organization.”

Ironically, Gilger is interim dean because ‘cancel culture’ at Arizona State brought down her predecessor. Sonya Duhe, who was set to become the school’s dean, triggered student and faculty outrage when she posted a tweet in June saying she was praying for the family of George Floyd and “the good police officers who keep us safe.” Former students stepped forward to accuse Duhe of “microaggressions,” and the Cronkite School rescinded its offer to her.

After publishing a Q&A article in June in which a student interviewed a former police officer, students complained again. The school removed the article from the internet and replaced it with an apology note. (RT)

Assistant to the Azerbaijani President, Head of the Foreign Policy Department of the Presidential Administration…

Azerbaijan hits all-time high in new coronavirus cases, nearing 1000 in a day for the first time

988 more tested positive for coronavirus, 340 people recovered and 11 died from COVID-19 in…

Now that the Barca boss has gone and Lionel Messi’s got what he wanted, the pressure will be on him to deliver

Barcelona president Josep Maria Bartomeu and the board of directors have resigned from the club,…

On October 28, at around 15:30 Armenian armed forces fire on Azerbaijan’s Terter district, according…

The shelling of Azerbaijan’s Barda district is a gross violation of international humanitarian law, Ambassador…