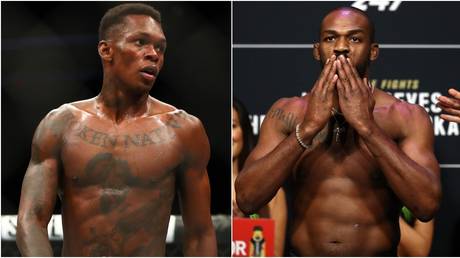 Jon Jones couldn’t hide his satisfaction as rival Israel Adesanya was bested by Jan Blachowicz in his bid to become the UFC’s latest two division champion at UFC 259, with Jones dismissing Adesanya as a “hype train”.

Jones and Adesanya had engaged in a months-long social media feud, with ‘The Last Stylebender’ forecasting that he would follow Jones to heavyweight and hand the longtime dominant fighter his first legitimate loss in mixed martial arts.

First, though, was to be a stop at the 205lbs division where middleweight champion Adesanya intended to seize the title which was for so long Jones’ exclusive property.

But far from being a stepping stone, the man who succeeded Jones as light heavyweight champion, Poland’s Blachowicz, was more than happy to play spoiler and remind Adesanya exactly who the bigger dog in the yard is.

HERE’S TO THE UNDERDOGS 🏆 #UFC259pic.twitter.com/5pvtTOpVXx

Blachowicz had promised to showcase his “Polish power” in the UFC 259 main event and while he did have measures of success on the feet against the pinpoint striking of Adesanya, the Pole’s win emphasized the chasm which exists between the middleweight and light heavyweight divisions.

Adesanya’s attempts to maintain distance and keep Blachowicz at bay with assortments of jabs and leg kicks seemed a viable strategy early but after a tentative opening round, Blachowicz upped the tempo in the second and connected with a handful of hard right hands which certainly caught Adesanya’s attention.

‘The Last Stylebender’ saw success in the third, landing a sequence of strikes which appeared to daze the champion but if there was a shift of momentum in the air, Blachowicz extinguished it in the following two rounds by securing well-timed takedowns. His strength advantage was obvious on the ground, with Adesanya unable to counter and as the clock wound down with Blachowicz raining punches from the mount position, it was clear that there was only one winner of the fight.

“I think he would be a little bit faster. He hit harder than I think,” Blachowicz said afterwards.

A disappointed Adesanya didn’t gain entry to the UFC’s exclusive double-champ club but he says that his plans at 205-pounds are far from over.

“I thought I was going to win. It didn’t go exactly the way I wanted it to go,” Adesanya said. “That was just my legs being fatigued. I knew what to do and I was trying to do it. It’s like a bad day at the game except it’s in the office tonight.

“I definitely will be back. Dare to be great. Going back to 185 and I’m going to rule that b*tch with a black iron fist.”

Speaking at the post-fighter presser, UFC boss Dana White paid tribute to Blachowicz’s performance – and revealed details of a curious exchange between the two in the Octagon.

“You’ve seen all the guys that Izzy has fought and what he has done,” Dana White said at the post-fight press conference. “Jan’s a tough guy. When I got up in the Octagon and put the belt on him tonight he turned around, looked at me and said, ‘you don’t believe in me’.

“I said, ‘what the f*ck? I do.’ These guys are crazy, man. They’re f*cking crazy. I’ve done nothing but say good things about the guy be he thinks I don’t believe in him.”

But one man who enjoyed what he saw was Jon Jones, who quite clearly gained a measure of satisfaction from his rival being unable to win the world title in a division Jones dominated for a decade.

The greatest striking MMA has ever seen? This shit needs to stop already.. people so quick to jump on a hype train.

Excuse me for enjoying this a little too much, these cartoon fans been talking crazy. https://t.co/xekm04o54t

Seems like everyone worried about me can’t get past what’s in front of them. Weird

Jones is expected to challenge for the UFC heavyweight title sometime after champion Stipe Miocic meets challenger Francis Ngannou for a second time later this month, but he evidently doesn’t seem to be wary of potentially eating his words ahead of his own decision to move up in weight – where Adesanya’s friend and fellow African, Ngannou, could well be waiting to welcome him.

For now though, the plaudits lie with Jan Blachowicz. There were genuine questions as to the identity of the world’s top light heavyweight fighter after Jones’ decision to relinquish the title last year.

Also on rt.com ‘She can beat some of the men’: Amanda Nunes retains UFC featherweight crown with routine win over Megan Anderson (RT)