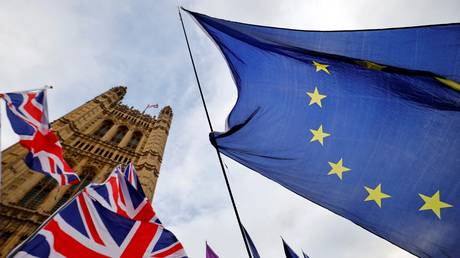 UK PM Boris Johnson is reportedly set to step into the Brexit negotiations personally with a call to the European Commission President Ursula von der Leyen, as Ireland’s leader hopes a draft deal will be ready in the coming days.

According to British media reports on Monday, Johnson is expected to speak to von der Leyen in an attempt to address the current barriers to a Brexit trade deal ahead of the new deadline next Tuesday. The two sides remain at loggerheads over fisheries and state aid.

This isn’t the first time that Johnson has intervened in the talks, working with the EU to go above negotiators and speak directly to EU leaders. However, this comes with days to go until the updated deadline that has been set to ensure that the UK-EU trade deal is in place by the end of the transition on December 31.

Also on rt.com Post-Brexit trade deal still ‘some metres away’, but both parties optimistic despite Covid hitting high-level talks

One potential route reportedly under consideration to circumvent the existing issues is to implement a temporary deal that would be reviewed in a decade, separating the decision over fisheries and pushing it back until a later date.

Despite the remaining challenges, which have been described by EU negotiators as “fundamental divergences,” Irish Prime Minister Micheal Martin has expressed hope that EU leaders will be presented with, at least, a draft Brexit trade deal by the end of this week. (RT)