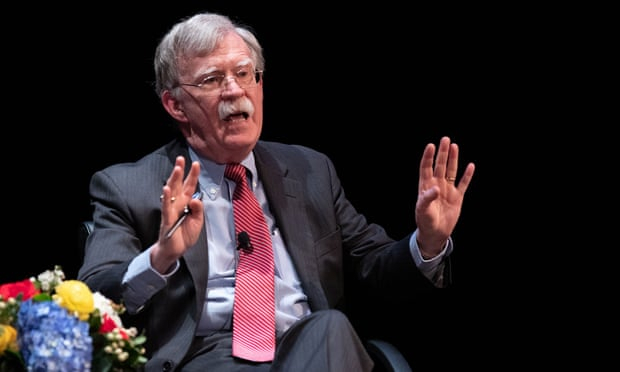 John Bolton celebrated Presidents’ Day by breaking his silence for the first time since Donald Trump’s impeachment trial – speaking of his frustrations and teasing the content of his forthcoming book, the Guardian reports.

But when it came to his former boss, the president’s former national security adviser was scant on details, hinting that he is restricted in what he can say.

Bolton, who left the White House in September following foreign policy disagreements, was interviewed on stage on Monday night at Duke University in Durham, North Carolina.

It was his first public speech since Trump’s impeachment trial where – despite repeated appeals by Democrats for him to testify, and Bolton’s stated willingness to do so if subpoenaed – he did not speak.

But following the leak of a draft of his unpublished forthcoming memoir, which reportedly described how Trump told him he wanted to delay US military aid to Ukraine until it agreed to investigate Democrats, including presidential hopeful Joe Biden, his shadow loomed large over proceedings – which ended in Trump’s acquittal.

Duke did not allow audio recording or livestreaming at the main event. Interviewer Peter Feaver, a professor of political science and public policy at the university, is understood to have told the audience that the restrictions were due to Bolton’s contract.

But journalists present at the event live tweeted Bolton’s comments as the pair spoke on stage.

Asked about Trump’s tweets about him, Bolton is reported to have said he could not comment, pending a White House review of the manuscript for his forthcoming book. “He tweets, but I can’t talk about it. How fair is that?” he said, according to one reporter present.

When asked on Monday what it was like to staff Trump’s 2018 meeting with Putin in Helsinki, Bolton reportedly said: “To pursue the right policies for America, I was willing to put up with a lot.”

“I’m not asking for martyrdom,” he added. “I knew, I think I knew, what I was getting into.”

According to CNN, Bolton and his lawyers have been battling with the White House about the book, scheduled to be published under the title The Room Where it Happened next month.

The Trump administration is reportedly concerned about the inclusion of classified information protected by executive privilege. CNN reports that the White House records management is reviewing the book.

During Monday’s talk, he appeared to repeatedly trail the memoir.

On the subject of Helsinki, he also replied – reportedly to audience groans: “I could read a chapter form my book here and give you the answer to that question.”

After a question about whether he agreed with Trump that his 25 July call was “perfect”, he said: “You will love chapter 14”.

He also reportedly referred to “censorship” of the manuscript. “This is an effort to write history … We’ll see what happens with the censorship,” he said.

Outside the venue, dozens of protesters gathered for a “The People v John Bolton Rally”. A Facebook page promoting the event described Bolton as “architect of the Iraq war, Islamophobe and war criminal” and criticised Duke for hosting him as an “esteemed speaker”.

His Duke visit is the first of two university appearances this week. On Wednesday he is due to speak with Barack Obama national security adviser Susan Rice at Vanderbilt University in Nashville on the subject of “defining US global leadership”.