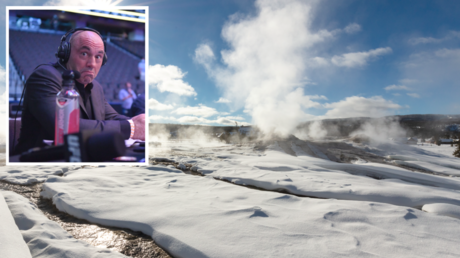 Seismic activity near Yellowstone National Park spiked over the weekend, with the US Geological Survey reporting a swarm of eleven earthquakes on Friday alone, the strongest of which measured a magnitude of 3.1.

The latest swarm follows an additional 34 quakes in the past month, all ranging in magnitude from between 1.6 to 3.1 and all roughly three miles deep.

While earthquake swarms are common enough across the continental US, each one that takes place near Yellowstone ratchets up tensions that the ‘Big One’ (a catastrophic earthquake that would likely destroy the western seaboard of the US and disrupt life around the entire world) may happen at any moment.

Yellowstone National Park is one of the most seismically active places in the US, recording 700 to 3,000 quakes per year. The largest single cluster of quakes ever recorded was in 1985, when more than 3,000 earthquakes rocked the park in a three-month period.

To make matters worse, Yellowstone is just one of two super volcanoes in the US, the other is located in Long Valley, California.

The Yellowstone volcano measures about 34 by 45 miles (54 by 72 kilometers), is located roughly three miles below the surface and last erupted 174,000 years ago.

If it were to erupt, it would explode with a force equivalent to 1,000 Hiroshima atomic bombs and would likely rip sections of the Western seaboard asunder and trigger tsunamis, vast forest fires and acid rain.

Despite odds of it erupting being roughly one in 730,000 in any given year, many fear an apocalyptic event every time there is an increase in seismic activity at the park.

UFC commentator, stand-up comedian and popular podcaster Joe Rogan shared the news with his 9.6 million followers on Instagram joking that humanity is “two catastrophes away from an alien invasion” and that 2020 is like “70 years rolled into six months.” (RT)