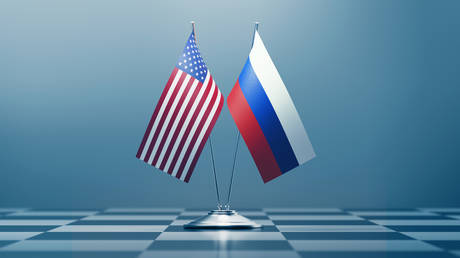 Joe Biden’s belief that Russia is the greatest danger to the US is based on emotion and outdated ideology. It should alarm Europeans as they could find themselves on the frontline of a ‘struggle’ that makes little or no sense.

US presidential challenger Joe Biden recently referred to Russia as the main threat to the US. The statement perplexed some observers given how his former boss Barack Obama dismissed Russia as a weak regional power in 2014, while in 2012 Obama himself had mocked Mitt Romney for arguing that Russia was America’s number one “geopolitical foe.”

Biden, the erstwhile vice president of Obama, has now seemingly made a complete reversal.

Remarkably, Russia has become the primary threat to the US without Washington clearly defining the rivalry. The vague references to Russia plotting against America, undermining democracy or being anti-Western have the common denominator of lacking coherence and conceptual clarity. What confrontation spawned this threat?

The Russian threat argument is founded on the narrative that Putin apparently reversed the supposedly Western friendly policies of Yeltsin and reignited confrontation. Yet, what exactly would pro-Western policies entail?

Yeltsin pursued a radical pro-Western platform, accepting unilateral concessions and a demeaning student-teacher relationship vis-à-vis the West, in the belief that a Greater Europe would be constructed. However, the West looked at a weakened Russia and decided to construct a new Europe without Moscow. Through expansionism, NATO and the EU have become the main institutions to represent the continent and any Russian resistance is depicted as ambitions to restore the Soviet Empire.

Also on rt.com ‘Not the case at all’: Kremlin lambasts Biden’s assertion that main threat to US is Russia, wants further cooperation

Yeltsin’s entire foreign policy platform subsequently collapsed before he brought Putin to power to reform the untenable policies toward the West. Putin continued to push for a Greater Europe, although from a position of strength by rejecting unilateral concessions and being ‘socialized’ or ‘civilized’ by the West. However, the West continues to conceptualize Yeltsin’s pro-Western policies as a capitulation by forfeiting any role for Russia in Europe.

Revisionism is the main concept that informs the West’s threat analysis of Russia. States can be divided into status quo powers, which seek to preserve the international system as it is, and revisionist powers that aim to overturn the status quo. Depicting Russia as a revisionist power for opposing NATO and EU expansionism is the great paradox that defines European security.

Irrespective of any benign intentions, the EU and NATO are revisionist by being the main vehicles to reorganize Europe. These two institutions push the dividing lines on the continent to the East and impose a destabilizing civilizational choice on the divided societies positioned between the West and Russia. NATO and the EU did not simply create an unfavorable status quo for Russia, they rejected the establishment of a new status quo order by rejecting any limitations to their expansion.

For centuries the West was concerned that the Russian Empire did not have any natural borders and expanded by impulse, yet in the post-Cold War era, this revisionist itch describes the West.

The failure to recognize Russia as a status quo power has continuously produced flawed predictions. In August 2008, Russia intervened in South Ossetia to repel an invasion by Georgia, which had been promised by NATO in April 2008 it would become a member of the military bloc. While Western media and politicians predicted that Russia would conquer Tbilisi and possibly annex Georgia, Russia merely restored the status quo of an autonomous South Ossetia.

In March 2014, Russia responded to the Western-backed toppling of Yanukovich by reabsorbing Crimea. Again, Western pundits’ warnings of Russia seeking to conquer Kiev and restore the Soviet empire proved to be wrong. Russia cemented its control over its strategic naval base in Crimea, which it already controlled before the Maidan.

Russia’s intervention in Syria in 2015 was similarly designed to preserve the status-quo, aimed against US efforts to topple the Syrian government in a wider revisionist effort to reorganize the power balance in the region.

Moscow is not led by communists seeking to rid the world of capitalism. Russia has neither the interest nor capacity to control a foreign population that does not want to live within Russian borders. How did this absurd concept end up dominating the Western discourse?

Former US Secretary of State Hillary Clinton referred in 2012 to the Customs Union and the pending Eurasian Economic Union as an effort to “re-Sovietize the region” and proclaimed Washington’s intention to slow it down or break it up. The Eurasian Economic Union is not devoted to world revolution, rather it is a voluntary international institution largely modelled after the EU, which mostly focuses on facilitating free movement of people, goods, services and capital. Does the reference to the Soviet Union help us to understand the Eurasian Economic Union in any way, or does it merely revive the inference of incompatible values and threats?

The effort to make Russia fit in the clothes of the Soviet Union also manifests itself in the constant accusation of Moscow attempting to establish a sphere of influence, which implies a region of exclusive influence. Is the pot calling the kettle black? Moscow’s main argument under its Greater Europe Initiative has been to end bloc politics in Europe and replace it with mutual accommodation and harmonization of interests. (RT)