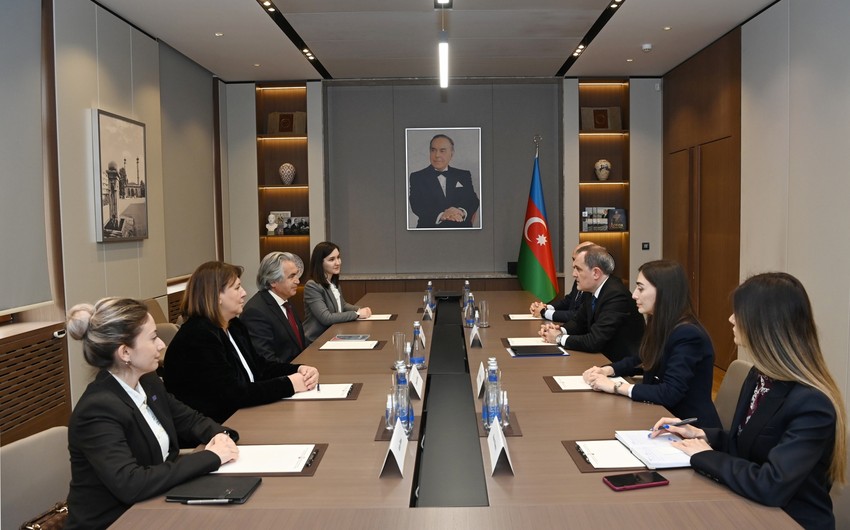 Azerbaijani Foreign Minister Jeyhun Bayramov met with a delegation led by Ocal Oghuz, Chairman of Turkiye’s National Commission for UNESCO, visiting Azerbaijan to participate in the international conference themed “The Role of UNESCO Conventions on the Aspects of Protection of Cultural Resources and Improvement of Their Implementation”, Report informs, citing MFA.

At the meeting, issues of brotherly relations between Azerbaijan and Turkiye and close cooperation at the level of the two countries’ National Commissions for UNESCO were discussed. In this regard, the importance of mutual support in the joint presentation of common heritage belonging to the Turkic world to the relevant UNESCO heritage lists was emphasized.

Bayramov stated that within the framework of Armenia’s 30-year-long aggression policy against Azerbaijan, a systematic policy was implemented towards the destruction, looting, and appropriation of the cultural heritage of Azerbaijan, and spoke about the damage to Azerbaijani cultural wealth during the past period, and the deliberate change of the historical and cultural nature of Azerbaijan’s cultural heritage. Also, he spoke about the mine threat in the Azerbaijani territories and the severe humanitarian consequences caused by it.

In addition, the minister provided information about the practical steps taken by Azerbaijan to eliminate the grave consequences of the 30-year occupation and noted that all cultural and religious monuments in the liberated territories, regardless of their origin, are duly protected and restored.

The minister drew attention to the fact that Azerbaijan repeatedly warned UNESCO about gross violations and illegal activities committed by Armenia and raised the issue of sending a technical mission to the occupied territories.

At the meeting, the other party, in turn, talked about the joint actions taken by TURKSOY member countries to protect the intangible cultural heritage and congratulated Azerbaijan on declaring the city of Shusha as the ‘Cultural Capital of Turkic world’ for 2023.

He pointed out that it is a shared responsibility at the international level to protect the cultural heritage of Azerbaijan, especially in the liberated territories.