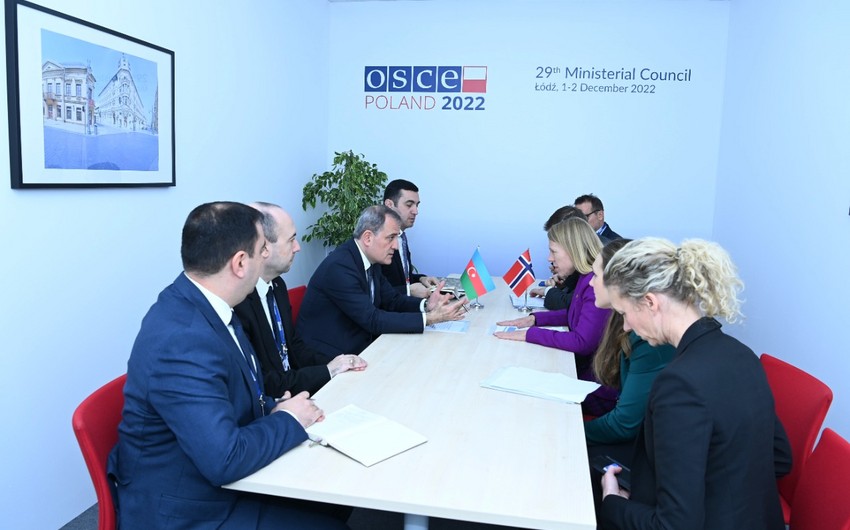 Azerbaijani Foreign Minister Jeyhun Bayramov met Norwegian Foreign Minister Anniken Huitfeldt within the framework of the 29th meeting of the Council of Ministers of the Organization for Security and Cooperation in Europe (OSCE) in Lodz and informed her about the threat of mines from Armenia.

Report informs, citing MFA, that the meeting discussed current issues of the bilateral and multilateral cooperation agenda, as well as the regional and international situation.

Bayramov said that during the 30 years since the establishment of diplomatic ties between the two countries, relations have developed in various directions, especially in the field of energy, oil and gas industry development.

The minister also briefed the other side about the regional situation in the post-conflict period, Azerbaijan’s peace and construction efforts in the region, provocations by Armenia, non-fulfillment of obligations arising from the Tripartite Statement dated November 10, 2020, including the threat of landmines.

Minister Anniken Huitfeldt noted that the events held on the occasion of the 30th anniversary of the establishment of diplomatic relations between the two countries this year contributed to the further expansion of cooperation. She emphasized that Norway welcomes the efforts to reduce the tension that threatens peace and security in the region and to establish peace. In this regard, the importance of normalizing relations between Azerbaijan and Armenia was expressed.