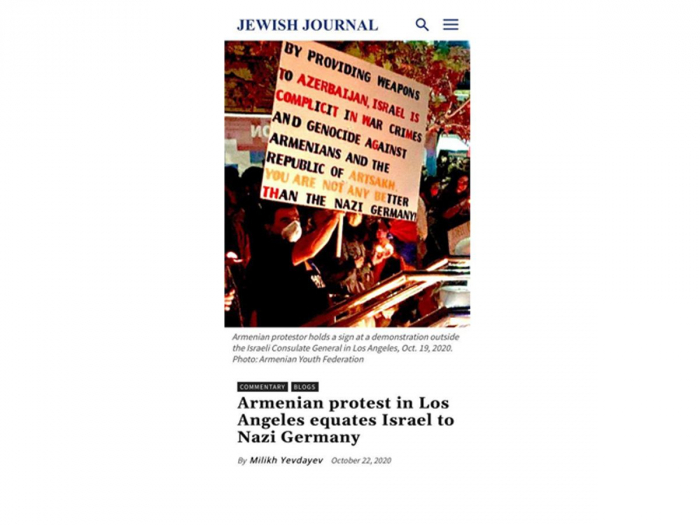 The Chairman of the Mountain Jewish Community of Baku, Milikh Yevdayev’s article on Armenian protest in Los Angeles, which equated Israel to Nazi Germany, was published by the Jewish Journal, one of the largest Jewish newspapers in the US.

In the article, the author mentions that the Armenian Youth Federation – a youth wing of the Armenian Revolutionary Federation – staged last week a protest against Israel for supporting Azerbaijan in front of the Israeli Consulate in Los Angeles and that on one of the posters at the protest it was written: “You are not any better than Nazi Germany”.

Highlighting the antisemitism in Armenia, Milikh Yevdayev notes: “In the Anti-Defamation League’s global index of antisemitism, Armenia is ranked as the second most antisemitic country in Europe and one of the top three most antisemitic in the world outside the Middle East and North Africa”.

Moreover, Yevdayev stresses that Armenia glorifies Garegin Nzhdeh, a general of Armenian origin who collaborated with Nazi Germany during WWII, unveiling his huge statue in the center of Yerevan. He mentions that another Armenian Nazi collaborator, Drastamat Kanayan known as general Dro, is also being glorified in Armenia. The author highlights: “The same Nazi collaborator Nzdheh founded the Armenian Youth Federation that staged the aforementioned anti-Israel protest in Los Angeles!”

Furthermore, Yevdayev notes that a few days ago, Armenia invited neo-Nazi members of the “Alternative für Deutschland” Party (Alternative for Germany) to the occupied territories of Azerbaijan.

At the end of the article Milikh Yevdayev states: “Azerbaijan continues to defend her sovereign territory and civilians, with Jewish, Muslim and Christian Azerbaijani soldiers fighting to not only defend the innocent targets of Armenian shellings but to liberate the stolen territory Armenia has illegally occupied for almost 30 years, with hopes and prayers to return the nearly 800,000 forcibly displaced Azerbaijanis to the land and homes of their birth, where they have longed to return all these years”.

One of the largest Jewish organizations in the U.S., the Simon Wiesenthal Center, shared the article on its Twitter, calling this equation of Israel to Nazi Germany despicable. They also mentioned that Azerbaijan, despite being a majority-Muslim nation, protects the rights of Christians and Jews, and has good relations with Israel.

The full text of the article can be read here: