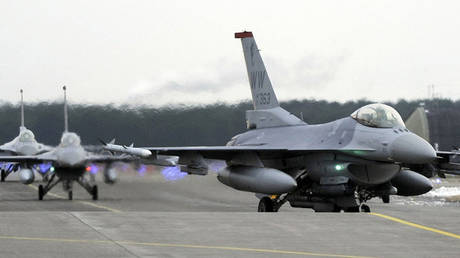 FILE PHOTO. F-16 jet fighters from the US Air Force at a base in Japan. © US AIR FORCE / JIJI PRESS / AFP

Tokyo officials have asked the US military to investigate an incident in which an American fighter jet dropped a fuel tank that landed in a residential area.

Suspicious metal objects were found in the coastal town of Fukaura, with a population of some 7,600 people, earlier this week. The debris, which landed in the center of the town, was later confirmed to be parts of an F-16 fuel tank.

On Tuesday, the Misawa Air Base in the north of Japan’s main island of Honshu confirmed there was an emergency with a US Air Force F-16 Fighting Falcon. According to the military, two external fuel tanks were dropped from the jet before it landed at Aomori International Airport. Officials from the base initially claimed the tanks fell in a nonresidential area. (RT)